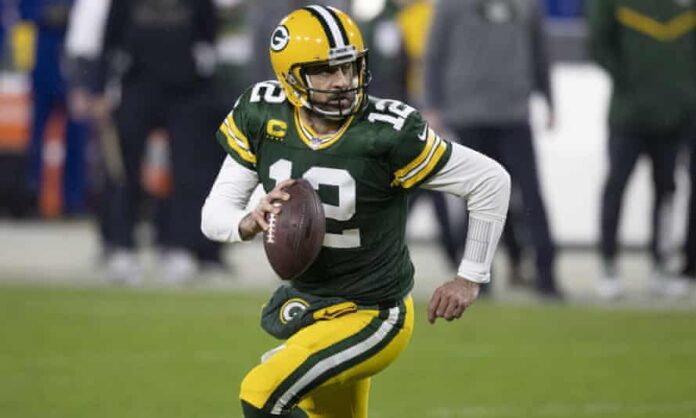 Aaron Charles Rodgers was born in Chico, California on December 2, 1983, to Darla Leigh and Edward Wesley Rodgers. His father is a chiropractor from Texas who played offensive lineman for the Chico State Wildcats from 1973 to 1976.

Rodgers attended Oak Manor Elementary School in Ukiah, California, after his family relocated there. He was featured on the front page of the Ukiah Daily Journal at the age of ten for his outstanding performance in a local basketball free throw competition.

Rodgers later moved to Beaverton, Oregon, where he attended Vose Elementary School and Whitford Middle School, as well as playing baseball in the Raleigh Hills Little League at shortstop, centre field, and pitcher.

The Rodgers family returned to Chico in 1997, and Aaron attended Pleasant Valley High School, where he started for two years and accumulated 4,421 passing yards. He set single-game records with six touchdowns and 440 yards all-purpose. In 2001, Rodgers set a single-season school record with 2,466 total yards.

Rodgers attended the University of California, where he set several career passing records, including the lowest single-season and career interception rates. The Packers selected him in the first round of the 2005 NFL Draft.

Rodgers became the Packers’ starting quarterback in 2008 after backing up Brett Favre for the first three years of his NFL career. In 2010, he led them to a Super Bowl XLV victory over the Pittsburgh Steelers, earning him the Super Bowl MVP award.

Rodgers was named Associated Press Athlete of the Year in 2011, and the Associated Press named him league MVP in 2011, 2014, and 2020. Rodgers is third on the NFL’s all-time regular-season career passer rating list, with a regular-season career passer rating of over 100 (the first to ever have one), while also having the highest passer rating, best touchdown to interception ratio, and lowest passing interception percentage in NFL history throughout the entire 2010s decade.

Rodgers has the second best touchdown-to-interception ratio in NFL history at 4.63, the league’s lowest career interception percentage at 1.4 percent, and the highest single-season passer rating record of 122.5.

Many sportscasters and players regard Rodgers as one of the greatest and most talented quarterbacks of all time.

Rodgers dated actress Olivia Munn from 2014 to 2017, and former NASCAR driver Danica Patrick from 2018 to 2020. Since the second half of 2020, he has been linked to actress Shailene Woodley. During his NFL MVP acceptance speech in February 2021, Rodgers thanked his “fiancée,” but did not specify with whom he was engaged.

Woodley announced her engagement to Rodgers on The Tonight Show Starring Jimmy Fallon on February 22.

Until 2017, Rodgers lived in Suamico, Wisconsin, a northern suburb of Green Bay about 10 miles from Lambeau Field. He also owns a home in the affluent beach community of Del Mar, California, 20 miles north of downtown San Diego, and spends the off-season in Los Angeles.

Rodgers has two brothers. Among his two brothers, Jordan, his younger brother is a quarterback at Vanderbilt. He had brief stints with the Jacksonville Jaguars and the Tampa Bay Buccaneers.

Rodgers was raised as a Christian. However, as an adult, he claims that he no longer belongs to any organised religion.

Approximately $103 million of his contract was guaranteed, with $80 million due by March 2019. In comparison, Brett Favre made a total of $135 million throughout the course of his career (on the field).

As per records, the American footballer holds an estimated worth of $120 million. He has reportedly earned around $90 million from his endorsements.

Rodgers and Milwaukee Brewers player Ryan Braun both had their names on a Milwaukee restaurant, but the restaurant was later closed after Braun’s performance-enhancing drug scandal. Rodgers claimed that after strongly supporting Braun, Braun lied to him about his PED use.

Rodgers was announced as a limited partner in the Milwaukee Bucks ownership group in April 2018, making him the first active NFL player to own a stake in an NBA team.

Rodgers is the founder and co-founder, with David Gruber, of itsAaron, a charity dedicated to “raising awareness for organisations and people who are changing the world.”

He also supports the MACC Fund, Raise Hope for Congo, and other humanitarian and charitable organisations.

Rodgers appeared on Celebrity Jeopardy! in May 2015, defeating Shark Tank investor Kevin O’Leary and astronaut and future United States Senator Mark Kelly to win $50,000 for his charity. His win earned $50,000 for the MACC Fund.

During his Jeopardy! appearance in 2021, the show made a charitable donation equal to the total winnings of the contestants (including runners-up) for those ten shows, thanks to the guest host.

Rodgers is an alumnus of the University of California, Berkeley. He has donated funds to renovate the athletic facilities at the school and has also established an endowed scholarship for transfer students. He was recognised by the school for his charitable work in 2021.

Read more: Patrick Mahomes net worth: How much does the Kansas City Chiefs quarterback earn?