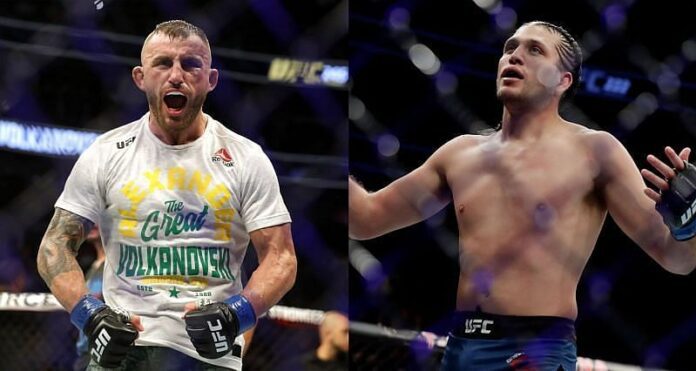 Volkanovski announced the likely date for his featherweight title bout against Ortega during a recent interview on The Joe Rogan Experience.

The defending champion intimated that he and ‘T-City’ would meet in early September to defend the UFC featherweight title. Volkanovski also revealed that the battle would take place in America. Nothing has been formally confirmed by the UFC on the subject.

Volkanovski stated, “Yeah, so when it ends. So from what I’m told, I don’t know if I’m gonna get in trouble saying this, I’m not sure but I think it is like September. Early September.”

At UFC 260, Volkanovski was scheduled to defend his UFC featherweight championship against Brian Ortega. However, Volkanovski was forced to withdraw owing to a positive COVID-19 test. The UFC finally pitted the pair against one other in the most recent season of The Ultimate Fighter.

Following victories over previous champion Max Holloway, Volkanovski will now turn his attention to a new opponent in the 145-pound category. Meanwhile, Ortega will enter the championship fight fresh off a convincing victory over Chan Sung Jung.

Ortega returned to UFC competition after a two-year hiatus following his loss to Holloway with an excellent performance against ‘The Korean Zombie.’ Ortega crushed Chan Sung Jung in their fight.

Alexander Volkanovski spoke about his time on The Ultimate Fighter

Volkanovski discussed his experience working alongside Brian Ortega at The Ultimate Fighter house during his interview with Rogan. The reigning UFC featherweight champion referred to ‘T-City’ as “artificial” and said it was simple for him to get under Ortega’s skin.

Read More: UFC fights that have been absolutely top-drawer entertainment so far in 2021