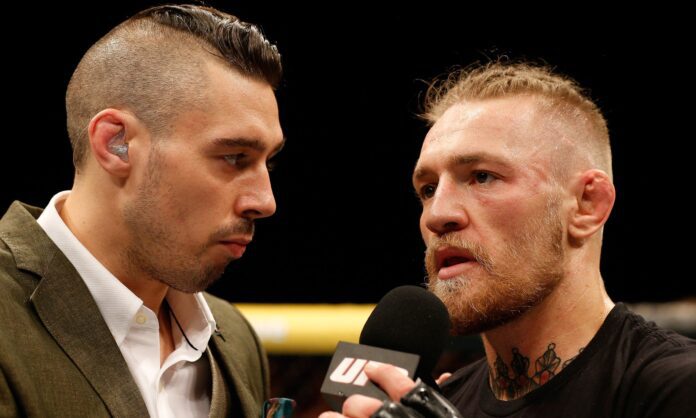 Dan Hardy, a UFC commentator, recently announced that he always knew MMA superstar Conor McGregor was bound for success as an entrepreneur.

The commentator believed in McGregor’s business potential because he had a strong relationship with former UFC owner Lorenzo Fertitta. Dan Hardy admitted this on an episode of the Real Fast With Mike Swick podcast.

He said, “You always knew Conor McGregor is a good businessman by how interested Lorenzo was around him. See, Lorenzo was not around the UFC anymore but he was fascinated by McGregor. And that must be because of the conversations that they had in private, one on one.”

He continued, “There are always photos of him drinking whiskey with loads of cash. I bet McGregor was betting, backing himself constantly in those early fights. And Lorenzo’s like, ‘I like this kid, he’s got balls.’ And I think that was a big part of his spark as well.”

Because of his business acumen, McGregor dominated this year’s Forbes list of highest-earning athletes. As a result, McGregor has surpassed Lionel Messi, Cristiano Ronaldo, and LeBron James as the richest athlete this year.

The Irishman made a significant portion of his fortune by selling his majority share in Proper No. Twelve, a whisky business.

McGregor is said to have won $180 million this year, with just $22 million coming from fighting and sponsors. The remaining $158 million came from McGregor’s company transactions, demonstrating his industry savvy.

Hardy also argues that more UFC fighters should strive to emulate McGregor’s accomplishments outside of the octagon.

He stated, “It is (incredible). But at the same time, I think it kind of almost devalues his business acumen. I got into a conversation about this on Twitter with a few people. Because the headline is that he’s the highest-paid athlete.

“I genuinely don’t believe he wants to fight me”: Michael Page...