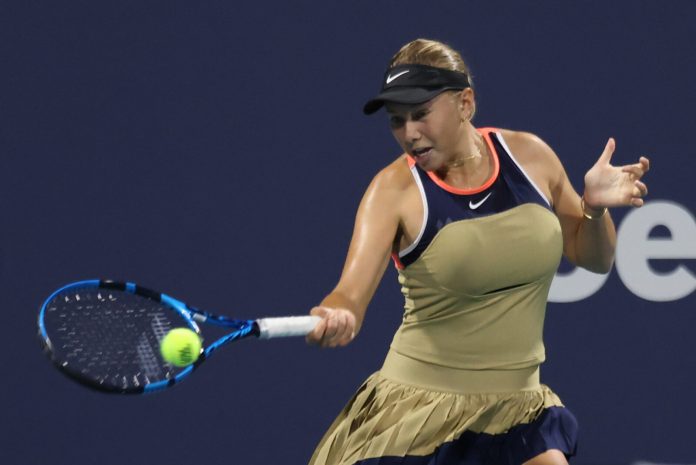 It was the second round of the 2021 US Open, and fans were treated to a thrilling three-set thriller. In a three-set victory over Amanda Anisimova, World No. 4 Karolina Pliskova made a remarkable comeback after losing the second set. The final score was 7-5, 6(5)-7(7), 7(9)-6(7) in the match.

Karolina Pliskova played brilliantly and even saved a match point to help her team win the match. She was up against not only Amanda Anisimova, but also the crowd, who was always cheering for their hometown girl.

But, in the end, she maintained her composure and executed an extraordinary performance on the court while under pressure.

Anisimova praised the crowd for their support after the game. Despite the fact that she lost the match, she battled valiantly.

“Thank you New York. You were an unforgettable crowd,” tweeted Anisimova.

The audience was the source of her increased vigour. She only let Pliskova break her in the first set and then played some aggressive tennis the rest of the way.

Amanda Anisimova, after dropping a match-point

Even though Anisimova appeared unfazed by the setback, she was desperate to win the match, especially after earning a match-point and coming so close.

She also expressed her disappointment, stating that she was disappointed because she wanted to win the match for her father.

Wanted to win so bad for my dad tonight… 😭💔

Karolina Pliskova, on the other hand, will now advance to the third round of the US Open 2021, despite Amanda Anisimova’s exit. This season, the Czech player has produced some incredible tennis and is one of the favorites to win the Grand Slam.

Novak Djokovic breaks down due to crowd support midway through final...