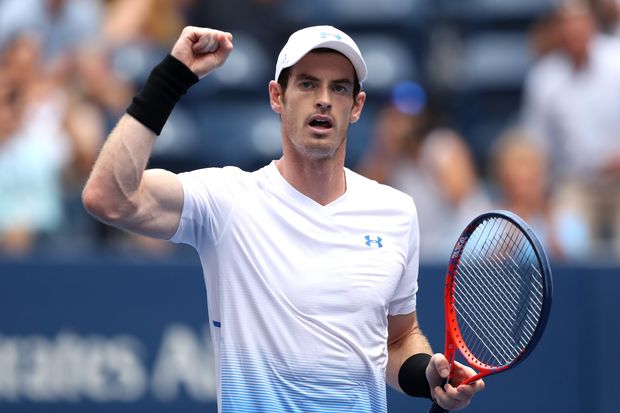 Andy Murray is a Scottish professional tennis player who represents the United Kingdom.

Sir Andrew Barron Murray was born in the Scottish city of Glasgow. Murray began playing tennis when he was three years old, when his mother Judy took him to the local courts. He competed in his first competitive tournament when he was five years old, and by the age of eight, he was competing with adults in the Central District Tennis League.

He decided to move to Barcelona, Spain, when he was 15 years old. He attended Schiller International School and trained on the clay courts of the Sánchez-Casal Academy, where he was coached by Pato Alvarez.

Murray has been ranked No. 1 in the world by the Association of Tennis Professionals (ATP) for 41 weeks and finished the year as the No. 1 player in 2016. He has three Grand Slam singles titles – two at Wimbledon (2013 and 2016) and one at the US Open (2012) – as well as eleven major final appearances.

From July 2008 to October 2017, Murray was ranked in the top 10 for all but one month, and he finished no lower than fourth in eight of the nine year-end rankings. Murray has 46 ATP singles titles to his name, including 14 ATP Masters 1000 titles.

Murray had his best season of his career in 2016. Murray reached three major finals that year, winning Wimbledon for the second time. In addition, he successfully defended his men’s singles gold medal at the 2016 Rio Olympics, making him the only player with two Olympic gold medals in singles. He also became world No. 1 for the first time and clinched the year-end No. 1 ranking by defeating Djokovic in his only ATP Finals.

Murray won his age group at the Orange Bowl, a prestigious event for junior players, in 1999, when he was 12 years old. He won it again at the age of 14, making him one of only nine tennis players in the 70-year history of the Junior Orange Bowl, alongside Jimmy Connors, Jennifer Capriati, Monica Seles, and Yishai Oliel.

He won the Junior US Open in September 2004 and was selected for the Davis Cup World Group play-off match against Austria later that month; however, he was not selected to play. He was named BBC Young Sports Personality of the Year later that year.

Murray turned professional in April 2005, when he was given a wild card entry into the Open SEAT, a clay-court tournament in Barcelona, where he lost in three sets to Jan Hernych.

Murray reached his first ATP final, facing No. 1 Roger Federer, at the Thailand Open. Murray was defeated in straight sets. He finished the year ranked No. 64 and was named BBC Scotland Sports Personality of the Year in 2005.

Murray took over as British No. 1 on February 27, ending Tim Henman’s seven-year reign. Murray was now ranked 42nd in the world, Greg Rusedski was ranked 43rd, and Tim Henman was ranked 49th.

Murray competed in singles, doubles, and mixed doubles at the London 2012 Summer Olympics. In singles, Murray lost only one set on his way to the finals, where he faced Federer, whom he defeated in straight sets for the loss of only seven games.

Murray became the first British man to win the Olympic singles gold medal since Josiah Ritchie in 1908, and only the seventh man in the open era to win two medals at the same Olympic Games.

After losing to Djokovic at the Australian Open in 2013, Murray made history by defeating the Serbian player to win the Wimbledon men’s singles championship that summer. He was the first British male to win Wimbledon in 77 years, and only the second Scottish-born player to do so since Harold Mahony in 1896.

Murray defeated Raonic in straight sets in the final on July 10, 2016, to win his second Wimbledon title and third major title overall. His Wimbledon victory was his third of the season and his 38th on the ATP Tour.

Murray’s next appearance was at the Olympic Games in Rio de Janeiro. He became the first player, male or female, to win two consecutive gold medals in the tennis singles events when he defeated Juan Martn del Potro in the four-hour final.

Murray was hampered by a hip injury for much of 2017, forcing him to withdraw from the US Open in late summer. In January of the following year, he underwent surgery.

Murray announced just before the start of the 2019 Australian Open that his hip was still bothering him and that he would likely retire by the end of Wimbledon that summer, if not sooner.

However, after battling through a first-round match that ended in defeat, he suggested that he may have another operation to regain mobility on the court. In the end, he underwent BHR surgery on January 2nd.

Murray returned to the professional tennis scene in June 2019, competing in tournaments such as the Queen’s Club Championships, Wimbledon, the Canadian Open, and the Winston-Salem Open.

Murray paid £1.8 million for the Cromlix House hotel near Dunblane in February 2013.

In 2005, Murray began dating Kim Sears, the daughter of player-turned-coach Nigel Sears. They announced their engagement in November 2014, and they married on April 11, 2015, at Dunblane Cathedral in his hometown, with the reception at his Cromlix House hotel.

The couple and their two daughters and son live in Oxshott, Surrey. Murray announced the birth of their fourth child on March 12, 2021.

Murray tested positive for COVID-19 in January 2021, prior to his trip to Melbourne for the Australian Open, and remained in quarantine and isolation at home, eventually missing the tournament.

Read more: Roger Federer: A look at the career and legacy of the Swiss tennis genius