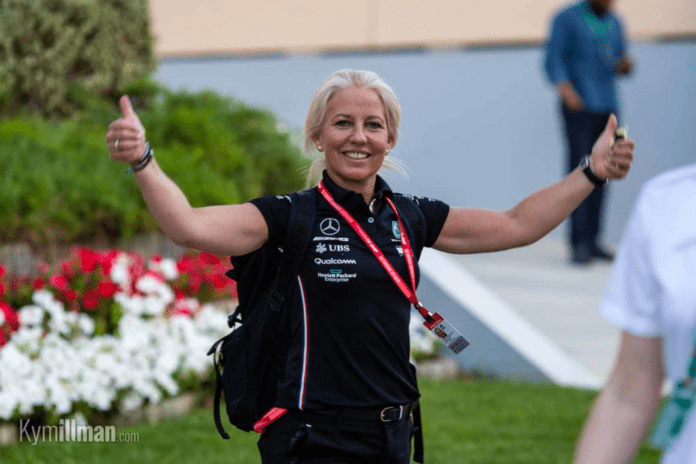 Angela Cullen was born on August 5th, 1974 in Devonport, New Zealand, a small bayside community on the coast of Auckland. She graduated from Auckland University of Technology with a Bachelor’s degree in health science, specialising in physiotherapy.

Cullen moved to England after graduation and began working as a senior physiotherapist for London’s English Institute of Sports. She worked there from 2000 to 2006 and was instrumental in preparing the British Olympic team.

In 2006, Cullen returned to New Zealand. Until 2010, she was a senior advisor of performance services at SPARC High-Performance NZ. She was also the director of the Body Performance Sports Injury Clinic.

Cullen is Lewis’s fitness coach. She is in charge of Hamilton’s diet, sleeping habits, mental training, and travel arrangements. She is such an excellent coach that Hamilton attributed his success to her abilities. She started working as Lewis Hamilton’s physio in 2016 and has grown to be quite important to him and the Mercedes team.

Angela Cullen and Lewis Hamilton’s friendship blossomed over time. She claimed that the Formula One winner has never failed to express gratitude for her assistance. Hamilton describes her as the best thing that has ever happened to him and the single hardest-working lady he has ever met. They even have matching Loyalty tattoos.

Angela Cullen is a married woman with three children, two boys and one girl. She is currently residing in Menthon-Saint-Benard, France, with her family in the Rhone-Alpes region. Silas Cullen, her husband, is a professional cyclist who presently works as a Director at Smart Coaching.

Angela Cullen is enthusiastic about sports and has made a career out of it. Throughout her career, she has held a variety of positions and worked with well-known athletes.

“I was born and grew up in New Zealand, famous for outdoor activities,” Angela said in an interview with her employer Hintsa Performance.

“I have always had a passion for all sports. I was hugely competitive and got involved in everything from netball, soccer, cricket, volleyball, basketball, to swimming athletics. If there was a sports team, I wanted to be part of it.

“But it was field hockey that I represented New Zealand in from the ages of 15 to 21. This was my first introduction to high-performance sports and human performance.”

Angela Cullen and Lewis Hamilton have a rock-solid relationship.  Angela is constantly available to Lewis for emotional support and to assist him in maintaining the greatest possible frame of mind. It’s no surprise, therefore, that the Briton characterised her as “one of the finest things that’s happened to me” in 2020.

In an interview, Hamilton admitted, “People for sure won’t understand it, naturally, because they see it from a distance, but she has been one of the greatest things that’s happened to me in my life.”

“I’ve been fortunate to work with a lot of people and she’s the single hardest-working woman that I get to be around,” Hamilton said.

“She’s focused, selfless, and she makes my weekends peaceful. Every day I wake up, whatever time it is, she’s just positive – never a single day has she been negative, so that’s very, very important.”

The pair’s friendship extends beyond their involvement in Formula 1. Angela has been seen indulging in various activities with Lewis in their spare time on multiple occasions.

Lewis, for example, stayed in Australia after the 2020 Australian Grand Prix was cancelled due to the COVID-19 outbreak and went rock climbing with Angela.

Another occasion the two were spotted together was soon after the 2021 Monaco Grand Prix, when Lewis, Angela, Toto Wolff, and other pals were spotted having fun aboard Sir Philip Green’s yacht in Saint-Jean-Cap-Ferrat, France.

Lewis could be spotted riding a jet ski and generally unwinding after a rough weekend.

Read more: Angela Cullen net worth: The physiotherapist who helps Lewis Hamilton stay at the top of his game

Dustin Diamond net worth: How much is the late actor, comedian...