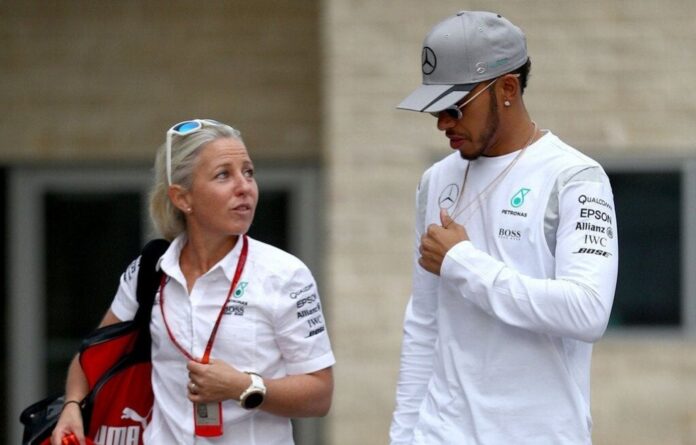 Lewis Hamilton‘s 2-year contract extension came as pleasing news for everyone on his team at Mercedes. This includes Angela Cullen.

Cullen, his physiotherapist, is currently Hamilton’s favorite person on the paddock who has been by his side since 2016.

Looking back at recent events, she expressed her excitement on Hamilton’s extension and getting to spend two more years with the Brit.

Hamilton reshared her message and replied, “Couldn’t do without you.”

Who is Angela Cullen?

Angela Cullen is the last person Hamilton meets before a race and the first person he sees after it. The seven-time world champion has shared every celebration with his right-hand woman.

Hamilton claims that Angela is among the most important persons in his life.

“People for sure won’t understand it, naturally, because they see it from a distance, but she has been one of the greatest things that’s happened to me in my life,” he said.

“I’ve been fortunate to work with a lot of people… and she’s the single hardest-working woman that I get to be around.”

She plays a crucial role in keeping Hamilton in a positive spirit, something that can become difficult looking at the pressure that drivers face.

Angela was instrumental in many of Hamilton’s wins

Hamilton, before working with Angela, had a trainer who did not understand his physical issues. However, with Cullen, he never faced any problems.

When he hired Angela, he never expected the relationship to be the way it is now. The two of them even have matching tattoos saying ‘Loyalty’ on their wrists.

Hamilton has won four championship titles with Angela by his side. He is on his way to earning a fifth one soon.

With the extension of his contract, the powerful duo will ensure that Hamilton gets a lot more podiums.