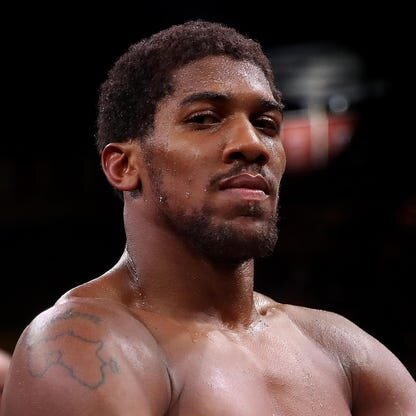 Anthony Joshua, OBE is a professional boxer from the United Kingdom.

Anthony Oluwafemi Olaseni Joshua, the son of Yeta and Robert Joshua, was born on October 15, 1989, in Watford, Hertfordshire. His mother is Nigerian, and his father has Nigerian and Irish ancestors.

Ben Ileyemi, his cousin, is also a professional boxer. In 2013, the two made their professional debuts together. Joshua spent a portion of his childhood in Nigeria as a boarding school student at Mayflower School in Ikenne. When he was 12, his parents divorced, and he returned to the UK halfway through Year Seven to attend Kings Langley Secondary School.

He excelled in football and athletics, breaking his school’s Year Nine 100 m record in 11.6 seconds.

Joshua is a two-time unified world heavyweight champion, having held the WBA (Super), IBF, WBO, and IBO titles since December 2019, as well as the WBA (Super) title between 2016 and June 2019. From 2015 to 2016, he held the British and Commonwealth heavyweight titles.

Joshua, a latecomer to the sport, began boxing in 2007, at the age of 18, after his cousin suggested it.

During the 2011 World Championships in Baku, Azerbaijan, Joshua made a surprise appearance on the world stage by defeating Italian reigning world and Olympic champion Roberto Cammarelle, and then went on to defeat German boxer Erik Pfeifer in the semis before losing by a single point to local boxer Magomedrasul Majidov, who won a silver medal.

As a relative newcomer to the elite level of the sport, Joshua secured his spot at the 2012 Olympic Games in the super-heavyweight division en route to the final.

Joshua competed as an amateur for England in the super-heavyweight division at the 2011 World Championships, winning a silver medal. He also won gold for Great Britain at the 2012 Olympics.

In the 2013 New Year Honours, he was made a Member of the Order of the British Empire (MBE) for services to boxing.

Joshua debuted on the professional boxing scene in 2013 under the promotional banner of Matchroom Boxing. At the O2 Arena in London, he faced Emanuele Leo and defeated him in the first round.

He was named Prospect of the Year by The Ring magazine in 2014, a year after turning professional. His victory over Wladimir Klitschko in 2017 was named Fight of the Year by The Ring and the Boxing Writers Association of America. Joshua is the second British boxer, after James DeGale, to win both an Olympic gold medal and a major professional sanctioning body world title, and the first British heavyweight to do so.

Joshua is ranked as the world’s second-best active heavyweight by The Ring, Transnational Boxing Rankings Board, and BoxRec as of June 2021, as well as the seventh-best active boxer, pound for pound, by BoxRec.

Since 2014, he has been ranked as one of the world’s top ten heavyweights by BoxRec, and he was ranked first at the end of 2016 and 2017. In world heavyweight title fights, Joshua’s knockout-to-win percentage is 91.67 percent, with an overall knockout percentage of 70 percent.

Joshua stated in 2020 that he “and Eddie will always have a great friendship” with his longtime promoter Eddie Hearn, who has promoted him since his professional debut in 2013.

Joshua has expressed a desire to learn chess and read in order to improve his boxing and tactical abilities. He worked as a bricklayer before becoming a full-time boxer.

Joshua was also named to the annual Powerlist as one of the 100 most influential Black Britons, most recently in the 2021 edition. He has a tattoo of the African continent with the territory of Nigeria outlined on his right shoulder and says he has a strong connection to his Nigerian roots.

According to Forbes, ‘AJ’ has a total of $11 million in sponsorships alone. Furthermore, his salary and winnings total a stunning $36 million.

With a reported two-fight deal with fellow heavyweight champion Tyson Fury, he is expected to earn a lot more money in 2021.

The British tycoon is well-known for his charity work. AJ had raised a considerable sum of money for a charity called Key4Life.

Anthony Joshua’s net worth is estimated to be $80 million by Celebrity Net Worth.

Joshua was accused of racism in June 2020 for his remarks at a Black Lives Matter protest in Watford, where he said, “show them where it hurts, refrain from spending your money in their shops and economies, and invest in black-owned businesses.” Some interpret this as a call to boycott white businesses. In response, he stated that the speech was not his own and that he had read it on behalf of a friend.

Joshua was previously chastised for a series of incidents that occurred in November 2017. On Instagram, he called heavyweight boxer Eddie Chambers a “disgrace to the superior black race.” Eddie Hearn, Joshua’s promoter, claimed the message came from a fake account, but Chambers demonstrated it came from Joshua’s verified account.

Joshua later appeared on Snapchat to express his support for Zimbabwean dictator Robert Mugabe. Hearn later stated that Joshua has “a major problem with his social media accounts,” and that the accounts may have been hacked.

Read more: Tyson Fury net worth: How much is the professional boxer worth in 2021?