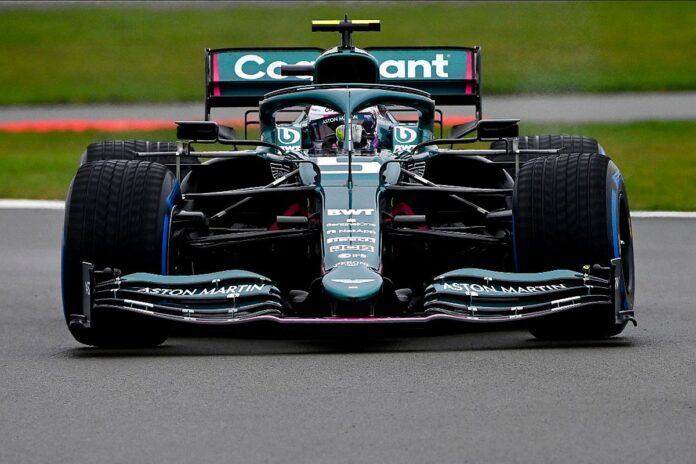 Aston Martin has delivered quite a savage response to Ferrari for their cheeky dig on social media.

An eventful Hungarian Grand Prix saw the unlikeliest of winners. In addition to that, Sebastian Vettel took second place. The Aston Martin driver was brilliant throughout race day, and deservedly finished P2. However, tragedy struck when Vettel was disqualified after the stewards managed to extract only 0.3 litres of fuel from his car.

The rules state that any driver must have a minimum of one litre that can be removed from their car at any time. However, Vettel had less than that, and was disqualified due to it.

That shook up the podium places, with Mercedes’ Lewis Hamilton taking P2 and getting more points than he already did. More crucially, it meant Carlos Sainz achieved another podium, as he made the jump to P3.

Ferrari took to Twitter to celebrate their driver’s P3. In a cheeky dig at their former driver Vettel, they addressed the issue without even mentioning his name.

On their official Twitter account, Scuderia Ferrari tweeted, “Carlos Sainz has been promoted to third following the disqualification of second-place finisher.”

Aston Martin’s social media team took exception to this tweet, and rather savagely roasted Ferrari in their reply. In their response, they uploaded a GIF of Vettel saying “I’m Sebastian Vettel” and tweeted it to Ferrari.

F1 fans on Twitter appreciated the Aston Martin social media team for their light-hearted burn. Moreover, many voiced their displeasure with Ferrari for doing that to a driver who spent seven years with them.

Vettel is doing far better at Aston Martin than he was in his last season at Ferrari. He already secured the team their first ever podium in F1, and did it again in Hungary. The disqualification took that away, until Aston Martin appealed against it. As it stands, he is still P2, but it may change depending on the verdict.

Even if he is disqualified, Vettel will focus on the positives, and take his momentum to Spa. He will look to build on this and make a statement with his new team.

Ace up their sleeves? Wolff refuses to reveal where Mercedes has...