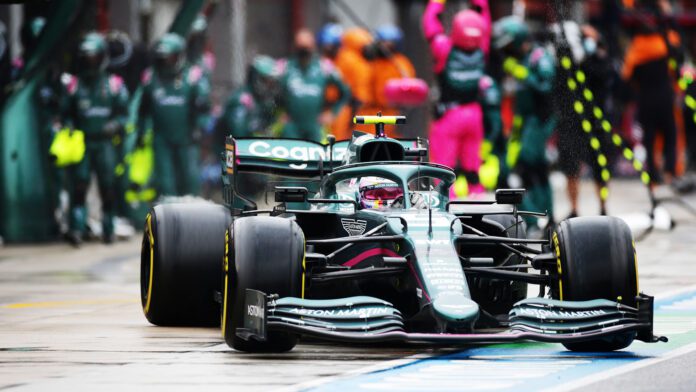 In the upcoming few weeks, Formula 1 will be welcoming a new version of race weekend with the introduction of sprint races.

These will be implemented at the British Grand Prix.

While there was general consensus regarding the matter, apparently all points were not covered.

As the day approaches, several teams including Aston Martin have begun issuing threats ahead of the British Grand Prix.

The British outfit are planning to quit one practice session to preserve their clutches for the sprint race.

According to Aston Martin’s sporting director, Andy Stevenson, the car’s clutches last only around 300 kilometers.

With the introduction of the sprint races which add 100 kilometers, the reliability of the Aston Martin car comes into question.

What did Aston Martin say?

In an interview, Andy talked about how the clutches of the car require maintenance beyond 300 km.

He also added that if the team knew about the sprint races, they would have designed a different clutch.

“These clutches were built for a different purpose. They need new washers and maintenance after 300 kilometers. If we had known what to expect before the season, we would have built different clutches,” he said.

“If we had have to drive with a clutch for a whole weekend without refreshing, we cannot guarantee that it will hold up. If the FIA ​​doesn’t give in, we might have to skip a training session. That can’t be in the spirit of the inventor.”

Aston Martin has requested Mercedes to provide them with their new clutch model.

These parts have been designed to run upwards of 700 kilometers before they require any maintenance.

However, this request has been denied by Mercedes after they cited a shortage of units to provide for both the teams.

Other teams to join the protest?

Apart from Aston Martin, two other teams have joined in raising their voice against sprint races – Alpine and McLaren.

It would be a foolish move to prioritize the sprint race which will help teams earn 3 points in contrast to a race that would give them up to 25.

Therefore, there is a good possibility that other teams might join in the fight.

The only solution to this is for the FIA to allow changing of the clutch midway into the race weekend.