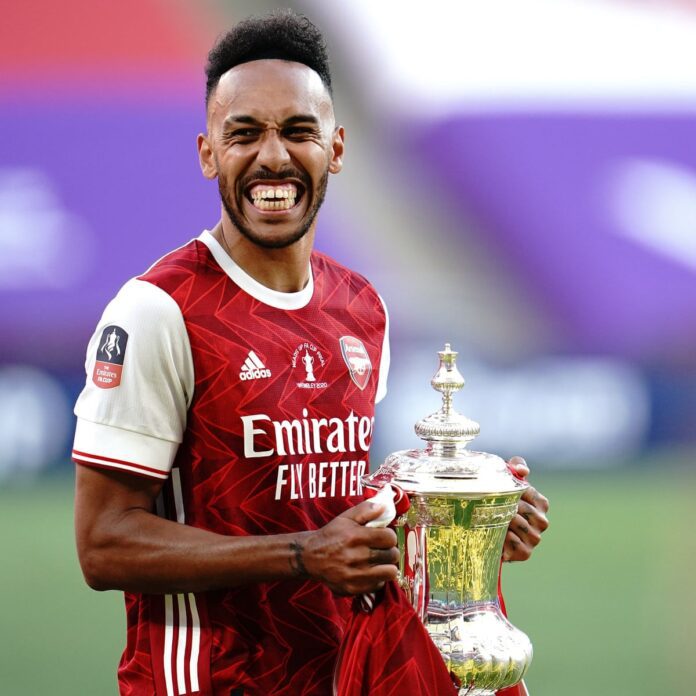 Pierre-Emerick Emiliano François Aubameyang is a Gabonese footballer who plays as a striker for the Premier League club Arsenal and the Gabonese national team. Aubameyang is well-known for his speed, finishing ability, and off-the-ball movement.

Aubameyang was born in Laval, France. He is the son of former Gabonese international footballer Pierre Aubameyang and the younger half-brother of Catilina and Willy, all of whom have played for Milan’s youth teams.  His mother is Spanish. He is fluent in French, English, Spanish, Italian, and German.

In January 2007, Aubameyang joined A.C. Milan’s youth academy. He was part of the squad that placed fourth in the inaugural Champions Youth Cup in Malaysia in August when he created a name for himself and drew the interest of international scouts. He scored against every opponent Milan faced, totalling seven goals in six games.

Aubameyang was loaned out to Dijon of France’s Ligue 2 for the 2008–09 season to get the first-team experience. His efforts there earned him a spot in World Soccer’s Talent Scout section in the summer of 2009. In all competitions, he finished with ten goals and two assists, including two goals in a Coupe de France tie against Selongey.

On June 24, 2009, it was announced that Lille, a Ligue 1 team, had opted to sign Aubameyang on loan. Aubameyang, on the other hand, did not fare as well as he did the previous season, scoring just two goals in 14 appearances, four of which he started.

Loans to Monaco and Saint-Étienne

Aubameyang was loaned out to Monaco for the 2010–11 season. He scored his first goal for Monaco in an away encounter against Lens on August 21, 2010, and he scored again on August 29 at home against Auxerre, which Monaco won 2–0.

Aubameyang was loaned to Saint-Étienne until the end of the 2010–11 season in January 2011, after only six months with the club. He finished the season with four goals and three assists. The loan was renewed for the entire 2011–12 season in July 2011.

Aubameyang signed a permanent contract with Saint-Étienne on December 22, 2011. The footballer was promptly added into the starting lineup and handed the uniform number 7. He got his maiden hat-trick against Lorient in February 2012.

He became an important member of the squad, scoring half of the team’s away goals during the season and went on to finish the season as Ligue 1’s fourth-best scorer, with 16 goals, trailing Montpellier’s Giroud with 21, PSG’s Nene with 21, and Lille’s Eden Hazard with 20.

Aubameyang started for Saint-Étienne in the 2013 Coupe de la Ligue Final on April 20, 2013. Les Verts won the match 1–0 on Brando’s goal, giving Aubameyang his first major trophy as a professional footballer. In all competitions, he finished the season with 18 goals and seven assists.

Aubameyang signed a five-year contract with 2012–13 Champions League finalists Borussia Dortmund on July 4, 2013. On July 27, 2013, he made his competitive debut for Dortmund against Bayern Munich in the DFL-Supercup, replacing Jakub Bazczykowski for the final 18 minutes of Dortmund’s 4–2 triumph, assisting Dortmund’s final goal, scored by Marco Reus.

Aubameyang made his Bundesliga debut on August 10th, scoring a hat-trick against FC Augsburg, including a goal on his first shot in the league.

Aubameyang joined Premier League club Arsenal on January 31, 2018, for a then-club-record sum of £56 million. He made his Premier League debut for Arsenal against Everton on 3 February, scoring the team’s fourth goal by chipping the ball over a grounded Jordan Pickford.

The footballer continued his excellent scoring record by scoring twice in Arsenal’s 3–0 home triumph over Stoke City. Aubameyang’s strikes against Stoke (one of which was also his first converted penalty for the club) made him the first player in the club’s history to score five goals in his first six games.

After a successful season with Dijon, Aubameyang was invited to play for Italy U19s, but he made his France U21 debut in a friendly match against Tunisia U21 in February 2009. Because he is of Spanish nationality, Aubameyang was also eligible to play for Spain. He chose to represent Gabon because his father was a former captain, although he has strong ties to Spain and aspires to play in La Liga.

Aubameyang was selected for the Gabon national team and made his debut on March 25, 2009. He scored his first goal in a 2–1 win against Morocco and subsequently added goals in friendlies against Benin, Togo, Algeria, and Senegal.

Aubameyang was a crucial player of Gabon’s national team, which reached the quarter-finals of the 2012 Africa Cup of Nations as co-hosts. He scored three goals in all, ending as one of the tournament’s top scorers. In the quarter-final against Mali on February 5, 2012, he set up the first goal for his team and struck the post. However, the game ended 1–1 after extra time, and Aubameyang’s penalty in the shootout was saved to settle the game.

Pierre-Emerick Aubameyang, the son of former Gabonese international Pierre Aubameyang, began his senior club career with Italian club A.C. Milan but never played for the club due to a series of loan spells in France. In 2011, he relocated to Saint-Étienne. He won the Coupe de la Ligue there before joining Borussia Dortmund in 2013. In Germany, Aubameyang was the league’s best goalscorer in 2016–17, winning the DFB-Pokal. He is also the club’s sixth all-time leading scorer.

Gabon’s all-time leading scorer is Aubameyang. He earned his Gabonese senior debut in 2009, at the age of 19, and went on to play in three Africa Cup of Nations competitions as well as the 2012 Summer Olympics. Aubameyang was crowned African Footballer of the Year in 2016, becoming the first Gabonese and second European-born player to do so.

He is married to Alysha Behague and they have two boys, Curtys and Pierre.

Read more: Pierre-Emerick Aubameyang net worth: How much does the Arsenal striker earn and where does he invest?