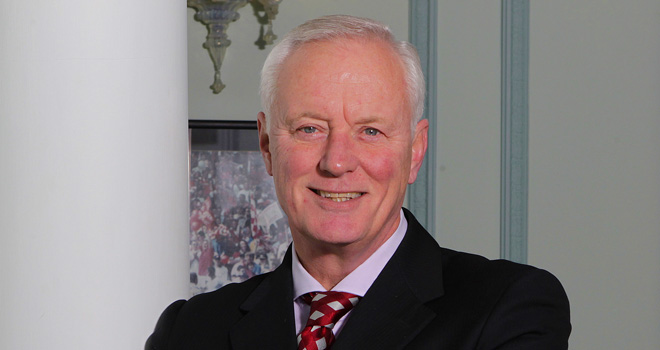 Barry Hearn is an English sports event promoter and the founder and President of Matchroom Sport Promotions.

Barry  Maurice William Hearn was born on a council estate in Dagenham, Essex, on June 19, 1948, and attended Buckhurst Hill County High School. As a teenager, he worked and then ran a number of small businesses, ranging from car washing to fruit and vegetable picking.

Following his qualification as an accountant, Hearn accepted the position of finance director at Deryck Healey Associates, a design firm based in Kensal Green (circa 1973). Kensal House Investments was formed, and DHA was renamed Deryck Healey International (DHI).

Hearn purchased a snooker hall in Romford, Greater London, in the early 1970s as a property investment. The BBC began promoting snooker on BBC2 in colour television the same year, resulting in long lines of people wanting to play snooker. Hearn and business partner Deryck John Healey then purchased Lucania Billiard Halls, which became the foundation of his future career, promoting snooker through colour television.

In 1974, Hearn began promoting sporting events with amateur snooker players Geoff Foulds (father of Neal Foulds) and Vic Harris. He became Steve Davis’ manager in 1976, and he went on to win the World Championship six times.

Hearn was elected as the new WPBSA Chairman in December 2009, after Sir Rodney Walker was unable to be re-elected and resigned. Following a vote by the members, Hearn acquired a 51 percent controlling interest in the organization’s commercial business World Snooker Limited in June 2010, with the goal of revitalising the game. The commercial business was separated from the WPBSA, the regulatory body.

Hearn entered boxing in 1987, with his first promotion being the Frank Bruno vs. Joe Bugner fight at White Hart Lane in October of that year. He offered Greg Dyke of London Weekend Television the television rights for £200,000, but Dyke agreed to pay £250,000 because he did not believe Hearn could deliver for the quoted price.

Hearn debuted the Prizefighter series in April 2008, a knockout tournament featuring eight different boxers. Eddie, his son, now manages the boxing side of the business.

In April 2021, Barry Hearn announced that he was stepping down as the chairman of the Matchroom Sport Group of Companies after almost 40 years, taking up the position of president in an advisory capacity. His new responsibilities will primarily include event strategy and global development.

Meanwhile, after this year’s World Championship, Steve Dawson will succeed Barry Hearn as chairman of World Snooker. Matchroom Multi Sport’s chairman will be Matthew Porter, and Matchroom Media’s CEO will be Katie Hearn.

From 1995 to 2014, Hearn was the chairman of the football league club Leyton Orient. Prior to Hearn’s takeover, the club was facing financial ruin as a result of the collapse of then-chairman Tony Wood’s coffee business in Rwanda during the Rwandan genocide. Hearn’s intervention and financial contribution ensured the club’s survival.

Although Hearn was successful in financially stabilising the club, his tenure included the club’s longest run in the Football League’s bottom division (the fourth tier) since its inception (in 1958). Orient earned promotion to the third tier of English league football (League One) at the end of the 2005–06 season, their first automatic promotion since the 1969–70 season.

Hearn resigned as honorary president of Leyton Orient in April 2017, expressing his displeasure with the club’s new owner, Francesco Becchetti, who he claimed had “not played by the rules,” leaving Leyton Orient players and staff unpaid for March 2017.

Susan Hearn is Barry Hearn’s wife. Katie and Eddie Hearn are the couple’s two children. He returned to the business after nearly going bankrupt in the early 1990s and suffering a heart attack in 2002, and has since become a multi-millionaire.

In the 2021 New Year Honours, Hearn was named an Officer of the Order of the British Empire (OBE) for services to sport.

Hearn is a passionate fisherman. After seeing the first Wrestle Mania recording in Ockenden, he pitched the idea of Fish-o-Mania to Greg Dyke at LWT. After being turned down, he sold the concept to Sky Sports, establishing a successful television franchise that has now lasted 19 years.

Hearn appeared in the video for “Snooker Loopy,” a hit for “rockney” pop rock duo Chas & Dave, alongside many Matchroom players.

According to various online sources, Barry Hearn’s net worth is estimated to be around $65 million. Although, his earnings are significantly more if we consider his son, Eddie Hearn’s wealth also.

Barry Hearn bought a massive Essex estate, which is now the home of Matchroom Boxing. He paid around £200,000 for the property around 30 years ago. While the property is now associated with his son, it has been in the Hearn family for some time.

The major chunk of his wealth has come to him through this company which focuses on boxing, darts, and snooker.