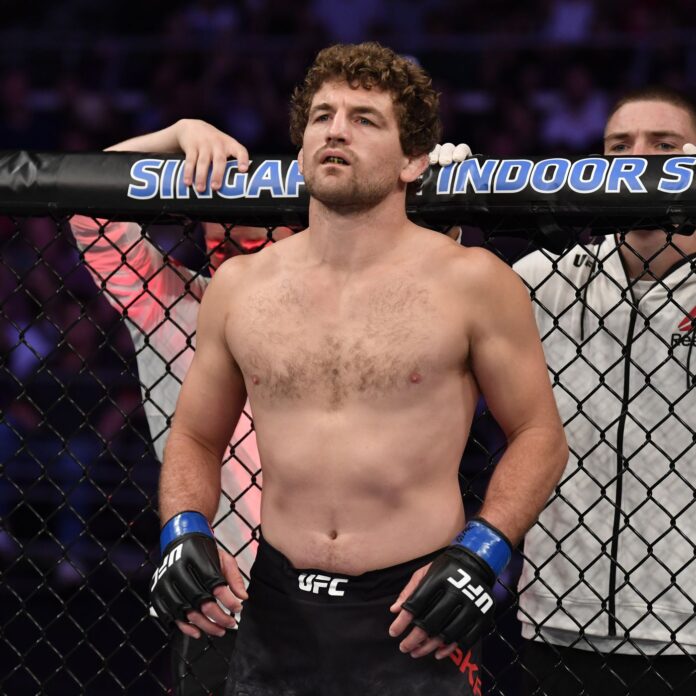 Ben Askren is a former professional MMA fighter and amateur wrestler from the United States.

Askren was introduced to wrestling by his father Chuck when he was six years old, but he didn’t take it seriously until he entered sixth grade and joined a club. He was a two–time WIAA state champion out of Arrowhead High School in Wisconsin during his high school career. Nationally, he finished on the podium in folkstyle, freestyle, and Greco-Roman competitions.

He was a two-time NCAA Division 1 national champion at the University of Missouri. He won gold medals at the 2005 Pan American Championship, the 2008 US National Championship, and the 2009 World Championship at the time of his non-professional career.

Askren made his professional MMA debut on February 7, 2009. It was sponsored by Headhunter Productions at the Holiday Inn Select Executive Center in Columbia, Missouri. Josh Flowers was knocked out in the first round with a TKO.

Askren fought in Patriot Act 2 in Columbia, Missouri for the second time. He won by arm triangle submission over Mitchell Harris.

Askren competed in the Bellator Fighting Championships Season 2 Welterweight Tournament. In his first bout at Bellator 14, Askren defeated Ryan Thomas by technical submission on April 15, 2010. The outcome of the fight was disputed since Thomas challenged the stoppage as soon as Askren let go of the choke.

On December 9, 2013, Askren signed a two-year/six-fight contract with ONE Championship.

On May 30, Askren faced Bakhtiyar Abbasov, who was on a nine-fight winning streak, in the main event of ONE FC: Honor and Glory. Askren won the opening round by submission (arm-triangle choke).

During his time with ONE Championship, he faced numerous MMA fighters, including Nobutatsu Suzuki, Luis Santos, Nikolay Aleksakhin, and Shinya Aoki.

On November 3, 2018, the UFC announced that it has signed Askren to a “trade UFC and One Championship agreement” in exchange for former UFC Flyweight Champion Demetrious Johnson.

Askren made his UFC debut on March 2, 2019, at UFC 235, against former UFC Welterweight Champion Robbie Lawler. Askren won the bout with a bulldog choke in the first round, courtesy of a disputed stoppage by referee Herb Dean.

On April 17, 2021, Askren battled YouTube star Jake Paul in a boxing match, losing by TKO following a back-and-forth on social media. Fans and fellow MMA fighters, on the other hand, questioned the match’s authenticity.

According to Triller, the fight drew at least 1.45 million pay-per-view purchases, though the figures’ veracity has been questioned by several people, including UFC president Dana White.

In his career, the fighter has a record of 19-2-0,1NC. Askren has won numerous titles in wrestling, disc golf, and submission grappling. He was also a former Bellator MMA and ONE welterweight champion. Askren was also the winner of the Fight of the Night bonus once, against Demian Maia.

In 2010, Askren married Amy. Askren and Amy have three children: two daughters, Alex and Andy, and a son named Ozzi.

Amy, Askren’s wife, is a licenced real estate agent at Firefly Real Estate in Wisconsin, near Milwaukee. Amy has a finance degree from the University of Missouri and began her real estate career selling houses in Tosa shortly after. She has 25,000 Instagram followers.

Ragnor, the couple’s cane Corso, is also a member of the family.

He enjoys disc golf and competes in it. Askren finished ninth in the Amateur World Championships in 2009. He is also an investor in cryptocurrencies.

Askren makes the most of his MMA riches. Aside from that, he has hosted the RUDIS Wrestling Podcast. He is also an ambassador for Dollamur Sport.

In a charity wrestling bout on May 6, 2019, Askren faced Jordan Burroughs. Unfortunately, Askren was defeated in a humiliating manner.