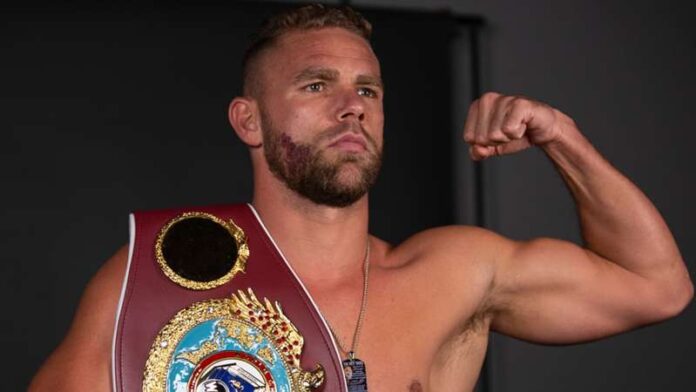 Billy Joe Saunders is a professional British boxer who was born on 30 August 1989. He is well known for holding world championships in two weight classes.

Saunders also stands out because he is the first boxer from the traveling community to hold the title for a two-weight world champion.

He is also ranked as the world’s sixth-best active super-middleweight by BoxRec and by The Ring magazine as of December 2020.

Saunders has also created history after his first world title fight with Andy Lee, another member of the traveling community. He took the win to become the WBO middleweight champion.

Saunders originally belongs to Cheshunt but grew up in a traveling community near Hatfield, Hertfordshire. His great-grandfather, Absolom Beeney, was among the most renowned bare-knuckle boxers in the community.

Saunders has two sons born to his former girlfriend Ruby.

He is also a good friend of heavyweight champion Tyson Fury.

He won 49 fights at the amateur level including the 2007 Commonwealth Championships and the 2008 Strandzha Cup.

Saunders, at the age of 18, also qualified for the 2008 Beijing Olympics in the welterweight division.

He beat European champions Andrey Balanov and Kakhaber Zhvania At the European area qualifier in Italy. However, he lost to Oleksandr Stretskyy before defeating Pavol Hlavačka to claim the third spot.

Saunders is also the first boxer from the British Romanichal community to qualify for the games.

He defeated Adem Kılıççı in the first round in Beijing but faced a loss to Carlos Banteux in the second. He was then suspended for improper behavior after an incident with a local woman during a pre-season training camp in France.

However, by December 2008, Saunders became a professional after signing up with Frank Warren in December.

As of February 2020, Saunders has a stellar record of 30-0. Out of these 14 have come through knockouts giving him a knockout rate of 46%.

Additionally, he has also earned the WBO world titles at 160 and 168 lbs.

Saunders is well known to be a hard-hitter considering his sleek jabs and is a major threat to his counterparts.

In the September of 2018, Saunders was caught on camera pretending to be a police officer and forcing a man to strip naked in his car.

In the video, Saunders can be seen telling the driver to remove his clothes because he thought he “had a weapon.”

Additionally, another video of Saunders surfaced where he is seen harassing a drug addict by offering £150 of crack cocaine to perform a sexual act or punch a passer-by.

The woman then punched a passerby and Saunders then drove away from the scene in his Rolls-Royce.

Another video of him surfaced where he is seen calling a woman a prostitute and stating “we don’t wanna get the clap off you”.

After a thorough investigation, Saunders was issued a severe reprimand and fined him £100,000.

Another controversy that surrounded the boxer was back in March 2020 where Saunders is alleged to have made a call to Delta Airlines. He informed them that three other boxers on a flight were infected with COVID-19.

This resulted in the trio being removed from the flight. Following this incident, an audio clip began to circulate online where Saunders was heard laughing about the incident.

In March, Saunders posted a video giving instructions to men on how to hit their female partners during isolation due to COVID-19.

In the video, Saunders demonstrates hitting techniques on a punching bag.

He then posted a follow-up video claiming that the previous video was meant to be a joke. To compensate, he donated £25,000 to a domestic violence charity.

However, this led to his boxing license being suspended and he was fined £15,000 after being found guilty and his suspension was then lifted.