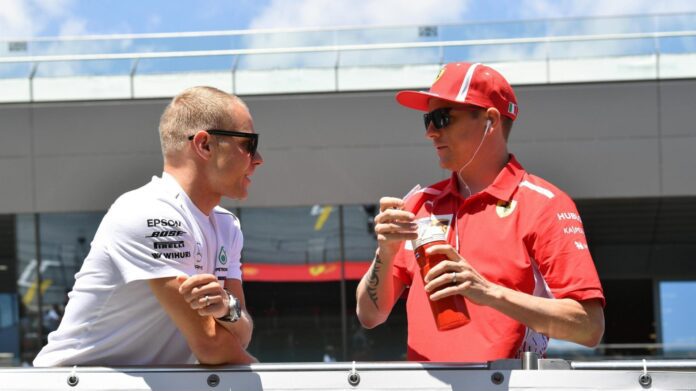 The drivers market has been buzzing lately, especially after Lewis Hamilton‘s 2-year contract extension with Mercedes.

As a result, all eyes are set on the second seat with the Silver Arrows.

There are many questions regarding Valtteri Bottas‘ continuation with the outfit for now with rumors floating that George Russell might replace him.

Team boss Toto Wolff has decided to keep us all in the dark regarding this matter till the summer break. However, speculations are still doing the rounds.

Additionally, there have also been talks of Alfa Romeo driver Kimi Raikkonen looking to retire by the end of the season.

The 41-year-old has often mentioned the stressful nature of the sport and his desire to settle into something more slow-paced.

With a seat looking to open at Alfa Romeo, there are rumors that Bottas might be a good fit for the outfit.

F1 reporter Dieter Rencken looks at the possibility of the Finn replacing the other.

Why does Raikkonen want to leave?

The 2007 champion is among the most experienced driver in Formula 1 history. In an interview, he reveals the physical stress that comes along with high-speed racing.

“I like to race, but it doesn’t just involve racing,” he said.

“If I could come to the track, take part in the race and that’s it, it would be perfect.

“I want to spend as much time as possible with my family.”

Alpha Romeo Team boss, Frederic Vasseur seems to agree that Raikkonen’s age might not be very compatible with what the sport demands.

The F1 reporter looks back at the final lap incident which took place between Raikkonen and Sebastian Vettel.

“I wonder if, quite simply, Kimi’s mistake at the end of the race is not due to a physical drop,” he stated.

“The Red Bull Ring is a circuit that tests the stamina of the drivers. The speeds are very high and maintaining them consistently with temperatures as high as last Sunday is not easy.”

The journalist had interviewed Raikkonen during his rookie days and has watched him grow ever since.

In the empty seat that Raikkonen leaves behind, the other Finn, Bottas, might fill in.

While Bottas has been a great support for Hamilton, his season has not been the very best so far.

Considering Hamilton will be 38 by the end of his contract, Mercedes will be looking to induct a new driver very soon.

Wolff has been in favor of George Russell, especially after his drive at the Sakhir Grand Prix last year. Thus many would be willing to bet against Bottas for the seat.

Rencken seems to believe that relations between Bottas and Mercedes are not too well for the moment.

He concludes, “I have heard various rumors about Bottas’ name to replace Kimi in 2022 and I do not think it is as remote as it might seem.

“I believe that Valtteri has all the credentials to go to Alfa Romeo and become a symbol of it.”

It will be an interesting scenario to see how things pan out following the 2021 season.