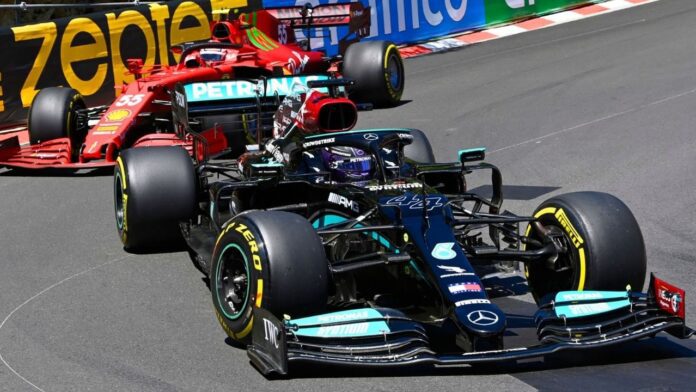 Carlos Sainz recently mentioned a ‘strange scenario’ that he had to go through with Lewis Hamilton during the Styrian Grand Prix.

The incident played out on the short Red Bull Ring circuit when Sainz was lapped by the seven-time world champion.

Hamilton was in the second position while Sainz was trying to catch Lando Norris in fifth place.

Unfortunately, the Spaniard found himself being held up by the Mercedes driver who was struggling for speed.

As a result, Ferrari radioed Mercedes to clear the way for Sainz to move forward.

Sainz revealed that he was stuck behind Lewis for 15 of the 71 laps of the race.

What did Sainz say?

“It was a very strange scenario,” Sainz told reporters after he finished sixth failing to overtake Norris.

“I came out of the pits on the hard tyres and was really looking forward to going to catch Lando because we had the pace.

“Unfortunately, I had to let Lewis by because I got blue flags while I was getting the hards up to temperature, and from there on I expected Lewis to pull away.

“But for some reason, Mercedes were struggling a bit with tyres and I was quite a bit quicker than him.

“I also didn’t want to do anything stupid as I know he’s fighting for the championship and he’s in P2 in that race,” he stated.

‘Did not want to compromise his race’

Sainz added: “I didn’t want to compromise his race either, but at the same time I was getting a bit impatient because I could see we were not catching Lando and that he was not going to lap Lando.

“So at some point, together with my team, we found a way to transmit to Mercedes that it would be very nice of them if they could let us by.

“I got within the DRS range and then they let us by and I could start chasing Lando again.

“But I did lose 15 laps behind Lewis that were quite important for us to at least mount a charge and put Lando under pressure.

“So yeah, those 15 laps behind him, killing the front tyres, trying to get within DRS range, were not ideal,” he mentioned.

Requested Hamilton to move aside

Sainz took to the team radio and asked Ferrari to see if Mercedes would let him move ahead.

He requested: “Can you not talk to Mercedes and tell them I will pull away please?”

Ferrari stated they would try to see what could be done. Shortly afterward, they told Sainz: “You can try to unlap yourself.”

While overtaking Hamilton he waved at him and said: “I owe Lewis one, thank you guys.”

Read More: Sebastian Vettel says he had to question whether he was a hypocrite while learning about sustainability