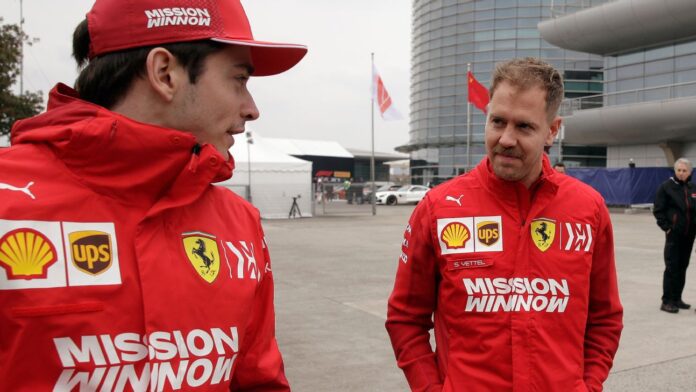 In F1, teammates provide a different dynamic to most other sports. While you would usually hope to feed off the energy of your teammate in a sport like football, it doesn’t work the same way in F1.

It is true that teammates in F1 can push you to the limit and thereby facilitate better performances, but it goes without saying that they eventually want to finish the race ahead of you.

However, it appears like that wasn’t quite the case at Ferrari last season with respect to his equation with Sebastian Vettel. Charles Leclerc, in an interview with Tom Clarkson on the Beyond the Grid podcast, reflected on the previous campaign.

“I mean, he had so much experience that it was different, it was not the same type of competition that I had with Seb than what I have with Carlos. With Carlos, we are more or less at the same age, we are so competitive with everything.”

Vettel not as competitive

Leclerc felt that Vettel’s years of being in the sport made him a bit less competitive.

“Seb had more experience, so he was a bit less competitive with everything. If I wanted to win something, he would basically let me win this thing and I would be happy, and he wouldn‘t care.

“With Carlos, it‘s a little bit different. I can see he is so, so pi**ed off if I am beating him at anything. It can be the stupidest thing and he would be so angry. Same for me,” Leclerc concluded.

Sainz and Leclerc have been getting along pretty well at Ferrari in their first season together. The Italian outfit currently sits in fourth position in the constructors’ standings.

Leclerc currently holds a lead over Sainz in the head-to-head standings, but we all know how quick things can change.

The drivers will look for a positive outing at the British Grand Prix. Where do you think the Ferrari drivers will end the race? Let us know in the comments below!

Read more: Martin Brundle pitches in on the Russell-Bottas debate – “Mercedes have to get a young gun”