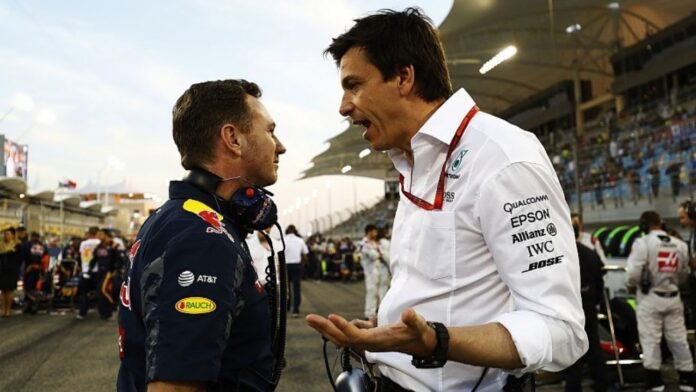 Christian Horner and Toto Wolff have been involved in a war of words for a while now, especially after Red Bull decided to use a flexible rear wing on their car.

The brawl between the team bosses is an off-shoot to the rivalry between Mercedes and Red Bull who are locked in a head-to-head battle for the title.

As a result, the bosses are not afraid to trash talk about the other camp.

A lot has been said about Toto: Horner

“But he is never afraid to burn down his own team and does so publicly. I’m not in favour of that, but of course, it’s his right.”

Baku was unfortunate for Max

The race in Baku saw Red Bull leading the pack at 1 and 2 with Max Verstappen in the lead.

To top it all, the Dutchman also had the fastest lap which would have added a huge bonus for the outfit in both the driver’s and constructor’s championships.

However, due to an unfortunate tyre blow-out, Verstappen had to retire which pushed Perez to the first spot.

Gap would have been vast if Max had won

“This championship is going in all directions. Max could have ended the weekend with ten or eleven points extra” Horner continued.

“If he had maintained the fastest lap, the gap would have been fifteen points.

“Then again, at one point it looked like we would be 21 points behind if Hamilton had been able to steal the win.”

Battle to last the whole year

Horner said that the close battle between Red Bull and Mercedes can be expected to last the whole year.

“Because both cars are so close to each other, it really goes in all directions.

“I think it will stay that way throughout the year and that’s great for the sport. It also motivates everyone in the team enormously,” he concluded.

Read More: WATCH: Verstappen loses out on P1 finish in Azerbaijan as he crashes out after tyre bust-up

Nikita Mazepin might be forced back to Russia to serve mandatory...