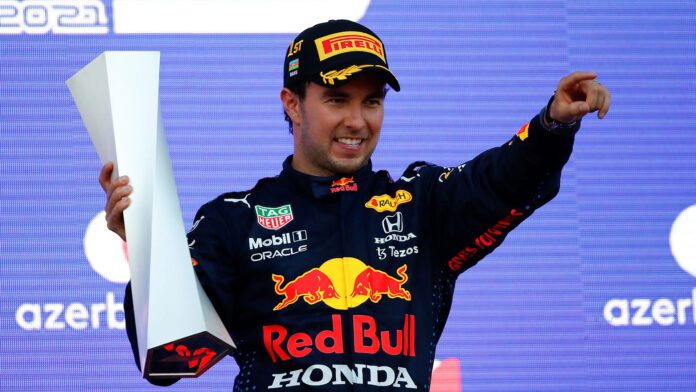 With the departure of Daniel Ricciardo from Red Bull back in 2019, there was a void created for the #2 driver in the team.

Pierre Gasly and Alex Albon were the two drivers who tried to replace Ricciardo but were not so successful as both drivers failed to shine.

At the time, only Sergio Perez was without a contract for 2021. This was after he had won a race the previous season.

As a result, the Milton Keynes outfit did not hesitate in signing a deal with the Mexican.

While Perez has not yet challenged Max Verstappen, his performance is far better than his predecessors.

Red Bull’s boss, Christian Horner, recently opened up about Perez’s placement in the team during a podcast.

Horner revealed that Perez has been responsible for changing the team dynamics this season. Additionally, Perez’s valuable experience has also provided a supporting role.

This has helped the Mexican overcome tremendous pressure while driving for the number 1 team on the grid at the moment.

“I think he just gives us that experience. He’s got 10 years’ worth of experience,” Horner stated at the F1’s Beyond the Grid podcast.

“He’s got an ability to manage tires within a race that is second to none. And he just brings a different dynamic into the lab, both Pierre and Alex are tremendously gifted drivers.

“But, the timing just wasn’t right and then the pressured environment that we have on the expectations was very tough for them.

“The way he settled in, the way he’s delivering, particularly after that victory in Bahrain last year, would have been very tough for him not to be in Formula 1.

“And I think he brings a dynamic in the fight that we have with Mercedes that’s starting to pay dividends,” he added.

At the start of the 2021 season, Perez had mentioned that he would require five races in order to get used to his car.

And true to his word, he delivered over the first five weekends.

The highlight of his current season was his race in Baku where he secures a first-place podium finish.

Later in Le Castellet, Perez overtook Valtteri Bottas towards the end of the race to claim P3. Then in Styria, he almost recreated the same results after scoring P4.

At the Styrian Grand Prix, Perez opted for a two-stopper with just 15 laps remaining in the race.

He charged at Bottas and brought down the 20-second gap to less than a second when the cars crossed the chequered flag.

Perez has earned 52 points in just the last three races and is only 40 points behind Lewis Hamilton.

Considering how his performance is increasing, we could be in line to see a battle between Perez and Hamilton.