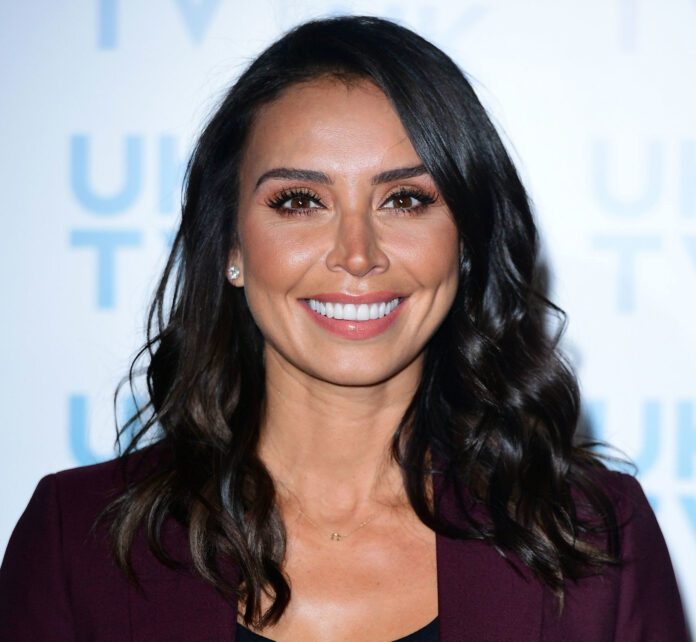 She has presented various television programs like The One Show (2007–2010), Daybreak, Dancing on Ice, and This Morning. She has been a presenter of the ITV lunchtime talk show Loose Women since 2016.

Additionally, she has also presented a couple of factual series for ITV. These included the series Off The Beaten Track (2013) and Wild Ireland (2015).

She also has a younger sister, Nicola.

She began with her television career as a runner. Afterward, she trained to become a floor manager while studying for her A-Levels at Bloomfield Collegiate School.

At Queen’s University, Belfast, while she was studying for a political science degree, she continued to work for BBC NI.

However, she didn’t complete her degree and instead moved into television work full-time.

Lampard started her career with the Give My Head Peace, a long-running BBC Northern Ireland satirical television comedy series.

She also made a cameo appearance in the show in 2016, in one of its special episodes.

With Brian Conley, Lampard co-hosted BBC Two’s Let Me Entertain You outside Northern Ireland. Then in July 2007, she earned the spot of a co-host of The One Show on BBC One.

This was after she replaced Myleene Klass.

She and Adrian Chiles hosted the show for 3 years.

On 20 January 2010, comedian Patrick Kielty revealed Lampard’s mobile number on the camera in what was a major mistake.

As a result, her phone was blasted with text messages and calls. However, she ended up changing her number since the event.

The same year, there was a lot of speculation on whether Lampard would extend her contract with BBC or move to ITV.

This was because Adrian Chiles had left the BBC to join ITV in 2010.

Amid the speculations, Lampard also left The One Show, the show she used to host with Adrian, to join ITV.

There were questions raised in Parliament over the scale of the proposed £900,000 per annum two-year BBC contract.

Afterward, she fired her long-term manager and signed with Chiles’ management company. Soon after, the BBC announced that it had withdrawn a suggestion to increase her current contract.

On July 8, 2010, The BBC confirmed that she wasn’t returning after The One Show program returned from the World Cup break in July.

Lampard had requested the BBC to increase her pay per year to 1 million pounds. However, it was refused by BBC.

Within the next three hours, she joined and signed a four-year contract worth 4 million euros with ITV.

Lampard herself was the topic of criticism and as a result, she and Adrian Chiles were replaced on 18 November 2011.

From 2010-2012, Lampard hosted many ITV Specials such as Simply Red: For the Last Time, Duran Duran: One Night Only, and Michael Flatley: A Night to Remember.

On 27 December 2014, she hosted the one-off magic special ‘Darcy Oake: Edge of Reality’. Here, she acted as Darcy Oake’s assistant in the special for two illusions.

In the following year, she presented a six-part documentary series titled ‘Wild Ireland’ which offered her the opportunity to travel across the Wild Atlantic Way in Ireland.

In October 2016, on an episode of Loose Women, she appeared as a guest panelist.

She guest-anchored various episodes of the show and soon became a permanent anchor, hosting the show in-rotation to Ruth Langsford and Andrea McLean.

The show was aired for five continuous nights from 27-31 October.

Lampard dated Curtis Bowen, an Ice Hockey player from the team Belfast Giants when she started her TV career.

In 2003, after ending her relationship with Bowen, she dated Christian Stokes, a Dublin restaurant owner to whom she got engaged in 2004.

She was then in a relationship with Mark Beirne, an entrepreneur, for 3 years until they separated in January 2009.

She received the Pride of England Award In October 2009 after which she began a relationship with Frank Lampard, a famous footballer.

They got married in 2015 and she took on her husband’s surname.

She has two stepdaughters, through her marriage to Lampard.

In May 2018, she and her husband announced that they are expecting their first baby together.

In September 2018, she gave birth to Patricia Charlotte Lampard, their daughter.

Via Instagram, she announced her second pregnancy on 9 January 2021.

In the same year, she gave birth to her second child, a boy, Frederick (Freddie) George Lampard.

Christine Lampard lashed out at a mother in what was a major social media controversy.

The mother had stopped her husband from bathing their young daughters.

Lampard gave an example of her husband, said “He has two very young daughters, are they supposed to go filthy for the week?”

In another incident, Frank Lampard had to face the storm of being called a sexist after he put up a social media post of his wife and his female dog on Instagram.

In the post, he called them ‘My two b****es’. Christine called this act and her husband ‘sexist’.