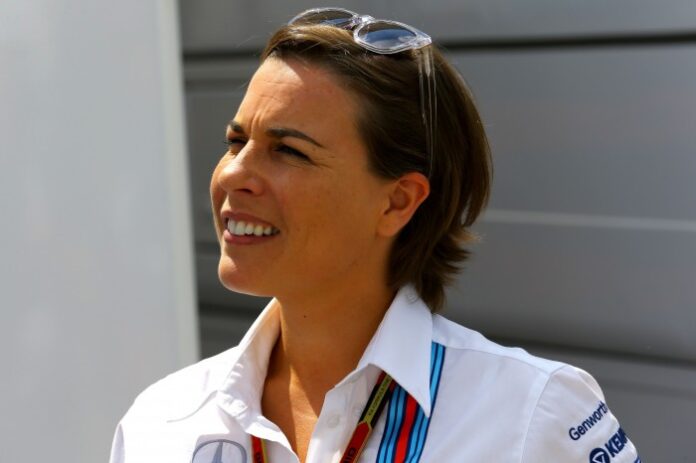 Claire Harris Williams was born in Windsor, Berkshire, in 1976. She is the daughter of late Virginia, Lady Williams and Sir Frank Williams. Claire Williams earned a bachelor’s degree in politics from Newcastle University in 1999.

Claire Williams went on to work as a publicity officer for the Silverstone racing track after graduating. She joined the Williams F1 team as a communications officer in 2002. She took over as the team’s communications director in 2010. Williams appointed her to director of marketing and communications in 2011.

Claire became the Williams family representation on the board after Frank Williams stepped down from the Williams board in March 2012. She was named deputy team principal of the Williams F1 racing team in March 2013. She was still in charge of marketing, communications, and the commercial parts of the team’s business in this role.

In the 2016 Birthday Honours, Williams was named an Officer of the Order of the British Empire (OBE) for his contributions to Formula One racing.

Williams stated on September 3, 2020, that she would quit as deputy team principal of the Williams team on September 7, 2020, following the 2020 Italian Grand Prix. Before the race, she was given the front wing of a Williams FW36 as a souvenir at the Williams motorhome.

Step Down from Williams F1

After more than 40 years of overseeing one of Formula One’s most iconic teams, the Williams family is stepped down so that the team’s new owners can have a clear shot at resurrecting its fortunes. Claire Williams, whose father co-founded the Williams F1 team, stood down as deputy team principal following the Italian Grand Prix.

“We have been in this sport for more than four decades. We are incredibly proud of our track record and the legacy we leave behind,” Claire Williams said. “We have always been in it for the love of it, for the pure pleasure of going motor racing.”

“We are greatly appreciative of Dorilton’s encouragement to continue, but in them, we know the team will be in good hands and the Williams name will live on,” she said. “This may be the end of an era for Williams as a family-run team, but it is the beginning of a new era for Williams Racing and we wish them much success in the future.”

Dorilton Capital chairman Matthew Savage thanked her for carrying on her father’s tradition as well as her attempts to assist women to play a larger role and gain more exposure in a male-dominated series.

“Claire’s achievement in sustaining Williams Racing’s heritage, relevance and commitment to innovation in a difficult environment since taking charge in 2013 has been nothing short of monumental,” he said. “She has also been hugely instrumental in shaping a more level technical and financial playing field for F1.”

The team received numerous proposals, but the family and board chose the private investment firm Dorilton Capital since their offer met all of the criteria.

“They are undeniably enthusiastic about the team,” Claire explains. “They certainly have the financial firepower that this team requires to return to the front of the grid, and that is all we want for our team as a family. I believe we have protected our staff and our reputation in F1, and this is the right move for us.”

Why Did Claire Williams Leave F1?

The Grove-based outfit was no longer what it used to be. Claire took over a struggling team that was fighting to make ends meet both on and off the grid. Her team only earned 5 points in her first season as Deputy Team Principal. However, there was a brief comeback when she was in charge. The British team finished third consecutively and fifth twice in the following four seasons.

But then came the years of toil once more. From 2018 to the present, the team has only won 8 points! Furthermore, their financial situation suffered a severe setback.

They lost more than $23 million in 2018, and despite major financial support from sponsors in 2019, they lost $18 million. When the epidemic struck, things took a turn for the worst, leaving the historic team in deeper water.

This was a big factor in Claire’s decision to call it quits. “We have always put our team first,” she explained. That’s something we’ve always done in the four decades we’ve been competing in this sport. This crew has always been near and dear to our hearts, the beating heart of our family.

The former deputy team manager also stated that despite selling her team, the new owners were eager to retain her on board. She, however, turned down this offer.

“It was absolutely my decision, and I’d like to make that clear,” she explained. “Dorilton asked me to carry on. They inquired both before and after the sale was completed. However, I believe that a clean break is generally best for everyone.”

Williams’ marriage to Marc Harris was announced in January 2018.

Williams has since assisted in raising funds and raising awareness for the organisation.

Read more: Claire Williams net worth: Did she live up to her family’s legacy?