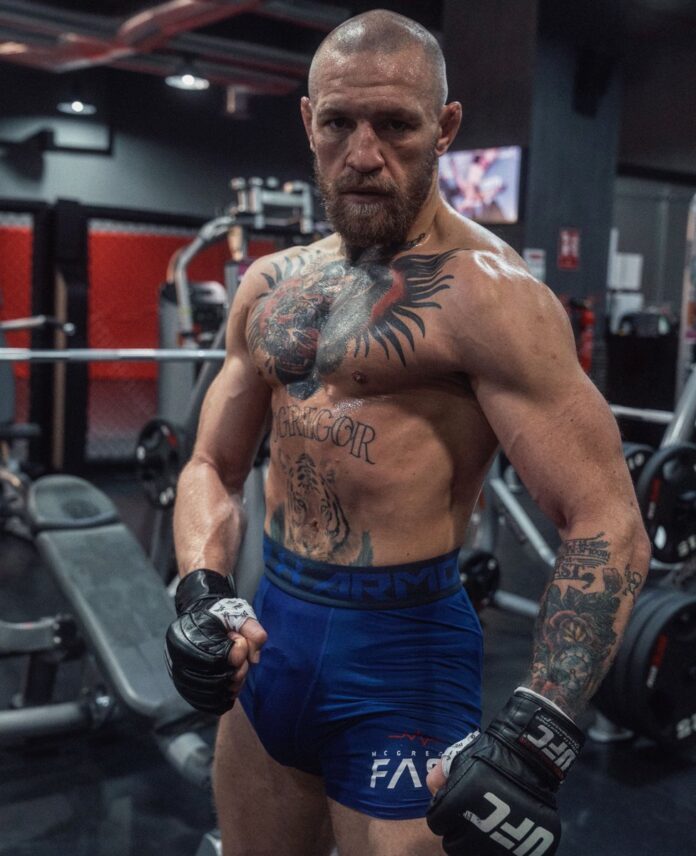 Conor McGregor is an Irish MMA fighter, boxer, and businessman.

He grew up in Crumlin and went to Irish-language schools, including Gaelscoil Scoil Mológa in Harold’s Cross for primary school and Gaelcholáiste Coláiste de hide in Tallaght for secondary school, where he also discovered his love of football.

McGregor used to play football for Lourdes Celtic Football Club in his youth. He also began boxing at Crumlin Boxing Club when he was 12 years old as a way to defend himself against bullies and boost his confidence.

McGregor moved to Lucan, Dublin, with his family in 2006 to attend Gaelcholáiste Coláiste Cois Life. After that, he began a plumbing apprenticeship. While in Lucan, he met future UFC fighter Tom Egan, and the two quickly began training in mixed martial arts (MMA).

McGregor is a former featherweight and lightweight champion of the Ultimate Fighting Championship (UFC). He is ranked #5 in the UFC lightweight rankings as of May 17, 2021.

McGregor previously held the Cage Warriors featherweight and lightweight titles. At UFC 194, he knocked out José Aldo for the UFC Featherweight Championship 13 seconds into the first round, the fastest victory in UFC title fight history.

McGregor became the first fighter in UFC history to hold titles in two weight divisions at the same time when he defeated Eddie Alvarez for the UFC Lightweight Championship at UFC 205.

Floyd Mayweather Jr. defeated him in his professional boxing debut. He is the most popular pay-per-view (PPV) draw in MMA history, having headlined five of the six most popular UFC pay-per-view events. His main event fight against Khabib Nurmagomedov at UFC 229 drew 2.4 million PPV buys, the most for an MMA event ever.

In North America, his boxing match with Mayweather drew 4.3 million PPV buys, the second-most in history. Forbes named McGregor the world’s highest-paid athlete in 2021, with a reported $180 million. He was also ranked fourth on the list in 2018, with a reported income of $99 million.

McGregor has been engaged to Dee Devlin, his fiancée, since 2008. Conor Jr, Rían, Croia are their three children.

Erin and Aoife McGregor are his sisters. He is a Catholic.

McGregor is sponsored by Beats by Dre, Monster Energy, Reebok, and Bud Light. His endorsement deals totaled $7 million as of 2017. McGregor signed a contract with Burger King in early 2018.

Just before his fight with Mayweather, McGregor announced a fashion collaboration with tailoring brand David August, naming the brand “August McGregor” and aiming to provide modern men’s suits to millennials. August had met McGregor through Dana White about three years before.

McGregor launched Proper No. Twelve Irish whiskey in Ireland and the United States in September 2018. The whiskey is named after McGregor’s childhood neighbourhood of Crumlin in Dublin 12.

McGregor stated in late 2018 that the brand had sold “hundreds of thousands” of bottles since its inception, with plans to restock in the United States and Ireland in December 2018. McGregor confirmed that the brand’s distribution will be expanded to the United Kingdom, Australia, New Zealand, Russia, and Canada in 2019.

McGregor and his business partners reportedly sold their majority stake in the company to Proximo Spirits, who previously held a 49 percent stake, for a reported $600 million in 2021.

Conor McGregor has a net worth estimated to be $180 million as of 2021, making him the richest MMA fighter in the world.

On 3 April 2018, Khabib Nurmagomedov and fellow fighter Artem Lobov got into a fight in which Nurmagomedov and his entourage cornered Lobov and slapped him several times. Lobov is known to be friends with Conor McGregor, with whom Nurmagomedov had verbal spats and trash talk exchanges.

McGregor and his entourage were let into the Barclays Center by credentialed members of his promotional team two days later, during promotional appearances for UFC 223. They confronted Nurmagomedov, who was leaving the arena on a bus with other UFC 223 “red corner” fighters, including Rose Namajunas, Al Iaquinta, Karolina Kowalkiewicz, Ray Borg, and Michael Chiesa.

McGregor ran alongside the slowly moving bus, then past it to grab a metal equipment dolly, which he threw at the bus’s window before attempting to throw other objects in the area.

The UFC’s president, Dana White, stated that a warrant was issued for McGregor’s arrest. McGregor later surrendered to police, where he was charged with three counts of assault and one count of criminal mischief.

At his arraignment, he was charged with menacing and reckless endangerment and was released on $50,000 bail until June 14, 2018. McGregor later pleaded no contest to a disorderly conduct charge and was sentenced to five days of community service and anger management classes.

After prosecutors declined to charge McGregor for the alleged sexual assault in 2018, a civil claim for damages was filed in the High Court in January 2021. McGregor’s spokeswoman said in a statement that the allegations against him have been “categorically rejected” and that he is “confident that justice will prevail” in the civil case.

McGregor had promised to donate $500,000 to his opponent Dustin Poirier’s charity foundation, the Good Fight Foundation, prior to UFC 257. Poirier claimed McGregor and his team stopped responding to the foundation’s emails and never followed procedures after their third bout was targeted, to which McGregor appeared frustrated and insulted.

The dispute sparked debate in the sports media. McGregor later revealed that he had made a $500,000 donation to a different charity foundation.