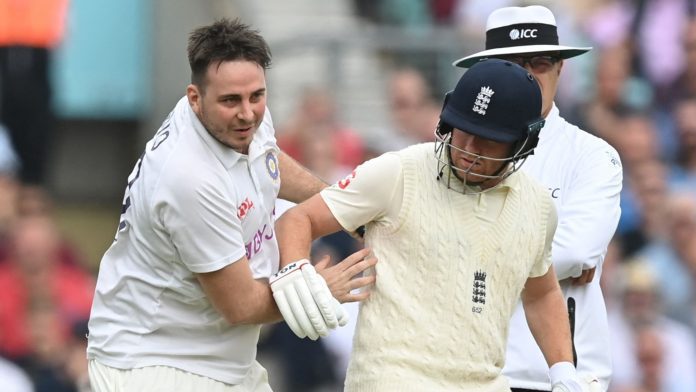 Pitch invader Daniel Jarvis, also known as Jarvo (the name on his shirt with the number 69), has been arrested for violating The Oval’s security.

He did it twice in two innings at Headingley, earning him a lifetime ban from the site as well as a fine. He came on to bowl on Friday during the second day’s play, wearing the same shirt he wore the previous two times during England’s innings’ 34th over.

While his pitch invasion was amusing the first time, the fact that it happened twice more has raised significant concerns about England’s field security. Jarvo nearly bowled the third delivery of the 34th over at The Oval before barging into Jonny Bairstow at the non-end. striker’s The batsman had no idea Jarvo was approaching and was taken aback when he collided with him.

To remove him from the field, security had to rush in. And this time, the authorities have taken significant action in response to the event, arresting Jarvo for storming the pitch. He is currently in the custody of South London police, and it is unclear whether he will face any serious consequences.

Jarvo has become quite a well-known figure in India and England since his first invasion, and he has even given a few interviews. But it’s safe to say that his frequent security breaches have upset the fans as well.

In the ongoing fourth Test, England has grabbed a significant 99-run lead in the first innings, putting them in command. They were bowled out for 290 runs courtesy to key contributions from their final five wickets, particularly half-centuries by Ollie Pope and Chris Woakes.

Read More: Manchester Test in jeopardy due to Indian staff being tested positive

Gautam Gambhir net worth: How much is the former India batsman...