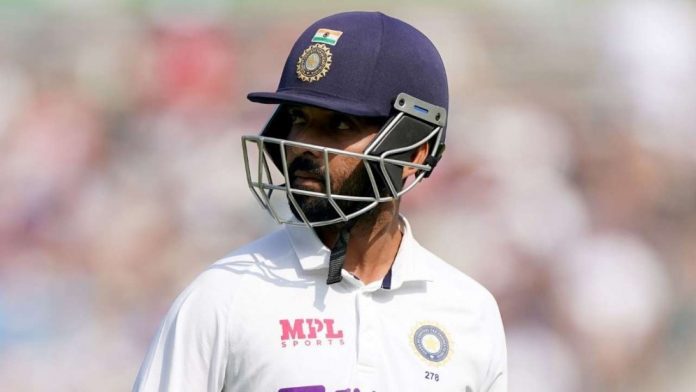 Ajinkya Rahane, India’s Test vice-captain, has struggled in the present Test series against England. He’s had a streak of poor performances, prompting speculation about his position in the side.

In seven innings, Ajinkya Rahane has scored just 109 runs. With the exception of a 61-run knock in the second Test, the hitter has struggled to build up huge totals. Rahane, according to Gavaskar, lacks confidence as a result of his lean patch.

“That was a bad shot for a man out of form. to be playing across the line towards square leg. There is no way the ball was going to meet the ball. His confidence is shot. He was not confident before because he hadn’t scored runs apart from that 60 at Lord’s. At Leeds, he hadn’t got runs,” Gavaskar told on The Sony Sports Network, according to reports on Cricket Addictor.

In both innings of the fourth Test against England, Ravindra Jadeja was despatched ahead of Ajinkya Rahane. The cricket onlookers were perplexed by this approach, which they reacted to in large numbers. Even yet, it didn’t seem to make a significant difference in the situation. Given Rahane’s form, Gavaskar believes that India could have averted this decision.

Gavaskar also added, “What it’s done to the psychology of a player – is that it says ‘look, we are not showing any confidence in you’. The confidence has to be shown. He is not scoring runs but he should be told that at No. 5, you are our batsman.’ not at 6. And that is what happened. No surprises that he got out for 0,”

Is Rahane struggling to pick up length?

The weather appeared good for batting on Day 4 of the fourth Test match. Rahane had escaped a near LBW call, but he couldn’t make much of it as he lost his wicket to Woakes soon after. Rahane attempted to flick the ball to his leg side, but he missed and was hit in the pads. Manjrekar mentioned that the batter is having trouble judging the length of the ball, which could be the problem.

Read More: Rohit Sharma has taken his batting up a notch in this series: Sachin Tendulkar

Ravindra Jadeja keen to remain focused through the course of England...

CA and ECB will not object to players competing in the...