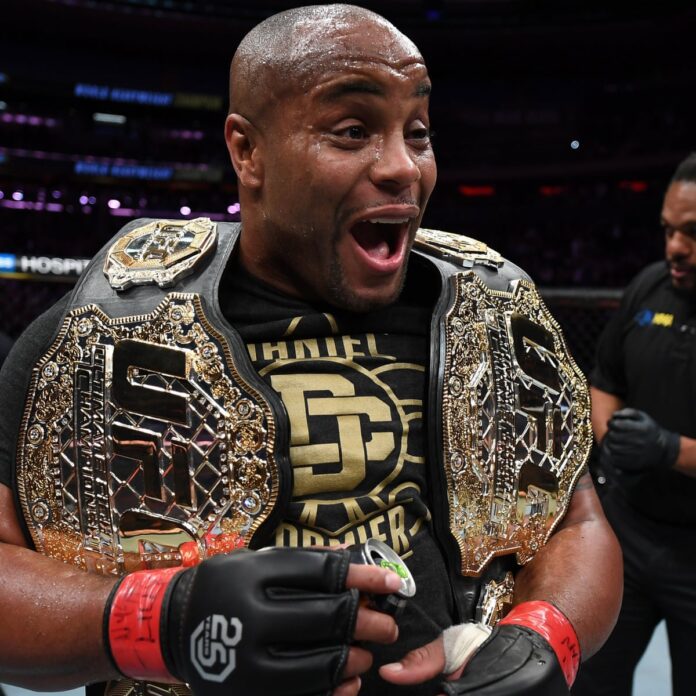 Daniel Ryan Cormier is a former professional MMA fighter and amateur wrestler from the United States.

Cormier grew up in Lafayette, Louisiana. Joseph and Audrey Cormier raised Cormier. He has an older brother, Joseph, a sister, Felicia, and a younger brother, Ferral.

Cormier won three Louisiana state wrestling championships in high school at Northside High. Cormier only lost twice after ninth grade, both times by injury default. His final high school record was 101–9, with 89 wins coming by a fall. He was named the state tournament’s most outstanding wrestler twice.

Cormier won a bronze medal in the Greco-Roman Wrestling cadet (15–16 years old) division at the World Championships in 1995. He was also an all-state football linebacker in high school, with a personal best timing of 4.5 seconds in the 40-yard dash. Cormier was given a football scholarship at LSU but turned it down to continue wrestling.

Daniel Cormier is a former Light Heavyweight and Heavyweight Champion of the Ultimate Fighting Championship (UFC). Cormier is only the second fighter in UFC history to hold belts in two weight classes at the same time, and he is the first to defend crowns in both weight classes. Cormier was a six-time member of the United States World or Olympic Wrestling Team, a World bronze medalist, a World Cup runner-up, a Pan American Games gold medalist (bronze in 2007), and a two-time Pan American champion.

He was an NCAA Division I National and two-time Big 12 Conference runner-up for the Oklahoma State Cowboys in folkstyle wrestling (all losses to eventual four-time NCAA champion Cael Sanderson of Iowa State), as well as a two-time NJCAA champion.

Cormier was the Strikeforce Heavyweight Grand Prix Champion and King of the Cage Heavyweight Champion before entering the UFC. He is the first fighter in history to have won a world championship belt in every promotion in which he has competed. Cormier is presently a UFC analyst and pundit.

Cormier opted to pursue a career in mixed martial arts after the 2008 Olympics. He trained at American Kickboxing Academy with Cain Velasquez, Jon Fitch, and Josh Koscheck, which helped him improve as a striker and submission wrestler.

Cormier signed an eight-fight contract with Strikeforce and made his debut at Strikeforce Challengers: Kennedy vs. Cummings, where he defeated Gary Frazier by TKO.

Cormier defeated John Devine by KO on March 26, 2010, at the Strikeforce Challengers: Johnson vs. Mahe event in Fresno, California. Shortly later, on August 21, 2010, Cormier competed in the Strikeforce: Houston event, defeating Jason Riley through submission (punches) at 1:02 into the fight.

Cormier made his official debut on April 20, 2013, against Frank Mir at UFC on Fox 7. He was victorious by unanimous decision. Because Cormier’s teammate, Cain Velasquez, is the UFC heavyweight champion, Cormier pondered going down to the UFC’s light heavyweight class.

Cormier faced Roy Nelson in his second UFC bout on October 19, 2013, at UFC 166. He was victorious by unanimous decision. He said prior to the fight that, win or lose, he would be stepping down to the light heavyweight division.

After Alexander Gustafsson was forced to withdraw due to a torn meniscus, Cormier was set to meet UFC light heavyweight champion, Jon Jones, at UFC 178 on September 27, 2014.

Jones, however, was forced to withdraw from the fight on August 12 due to an injury. The bout was eventually held at UFC 182. Cormier was defeated by Jon Jones in a unanimous decision at UFC 182. Both combatants received the Fight of the Night bonus.

Cormier was scheduled to meet Ryan Bader at UFC Fight Night 68 on June 6, 2015. However, on April 28, 2015, it was reported that Jon Jones had been stripped of his light heavyweight championship and suspended indefinitely after being charged with felony vehicular homicide in a traffic accident in Albuquerque, New Mexico.

Cormier was then removed from the Bader bout and replaced Jones in the UFC 187 title battle against Anthony Johnson on May 23, 2015.

Johnson downed Cormier with an overhand right in the first seconds of the fight. Cormier dominated the next two rounds before submitting Johnson in the third round with a rear-naked choke to become the new UFC light heavyweight champion.

The championship had last been changed hands in 2011. Cormier was awarded the Performance of the Night bonus for his performance in the fight.

On July 7, 2018, at UFC 226 in Las Vegas, Cormier faced off against Stipe Miocic for the UFC heavyweight championship. He won the fight by knockout in the first round, becoming the UFC’s second fighter to hold two belts at the same time. Cormier is one of four fighters to have held two UFC championships at the same time as of August 17, 2019. He won the Performance of the Night award for this fight. After being prodded by Cormier following his victory, Brock Lesnar emerged from the audience and entered the octagon to accept the new champion’s challenge.

Cormier and his ex-girlfriend had one daughter, who was killed in a car accident on June 14, 2003. He had previously been married to a woman named Robin.

Daniel Jr. was born on February 16, 2011, to him and his then-fiancée Salina Deleon. Daniel Jr. participates in amateur wrestling at AKA, where Cormier works as an assistant coach. Cormier and his fiancée welcomed a daughter on March 4, 2012. Cormier and Deleon married in June 2017.