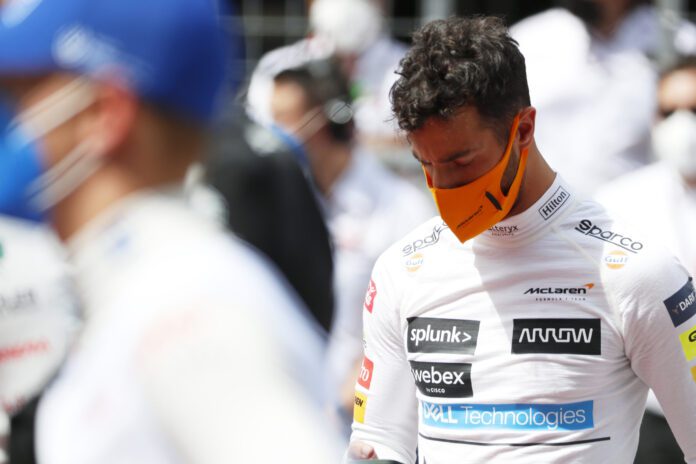 Daniel Ricciardo was overly emotional after a disappointing Styrian Grand Prix result as his season went from ‘bad to worse’.

Ricciardo managed to gather speed in the opening lap and jumped four spots to P9.

However, due to power issues, he ended up exactly where he started from towards the end of the race.

His McLaren teammate Lando Norris had a great race, however, finishing fifth on the grid.

“It was such a unlucky race, really,” Ricciardo told Sky Sports.

“It was an awesome start, awesome first lap and put us in such a strong position ahead of a lot of our quicker rivals.

“We were sitting pretty and all of a sudden I lost power so every position and more that I gained I basically just waved them on through,” he stated.

Issue was fixed later on

The Australian revealed that the issue was finally fixed on track but it was too late by then.

“Honestly the race is over after that,” he said. “It’s disheartening for sure. Out of our control for sure.

“I look at positions — I was ahead of (Carlos) Sainz on the same strategy and he finished sixth so I think we could have been sixth today.

“It was painful to see all the work undone when you’re trying to fix it and everyone’s just going past you.

“The weekend went from bad worse and I look forward to getting out of here and coming back next week with a fresh approach,” he concluded.

Unsure why the car lost power

Ricciardo was not sure why his car suddenly lost power, something he had never experienced with McLaren before.

He postulated that it could be due to the temperatures and the car searching for clean air during the race.

“I mean it’s obviously heartbreaking for me and disheartening but I’m not the only one that feels this pain,” he continued.

“I’m going to leave before I say some other stuff. Goodbye,” he stated.

F1 pundit not taking any excuses

F1 pundit Paul di Resta reckons that Ricciardo needs to be adaptable to the situations.

“You have to have a good car but Daniel got stuck after he had that issue and wasn’t able to make an impact and the car clearly had speed,” he said.

“His style needs to be adaptable, he needs to be able to change because clearly whatever he’s doing at the moment is not working and not in love with that McLaren.”

Speaking of McLaren’s potential, di Resta stated: “It’s quite a hard thing to unlock though if you need confidence with the car and you can see that’s for certain.

“He’s smiling and keeping going but I think in his head, it’s dented.

“He’s in this McLaren contract for the long haul as well so he needs to fix it because the team aren’t going to re-engineer a car that’s already doing well,” he concluded.

We can only wait and see how Ricciardo performs in future races.

Read More: Aston Martin to turn pink? BWT is adding pressure on the team – “It’s a question of financial feasibility”