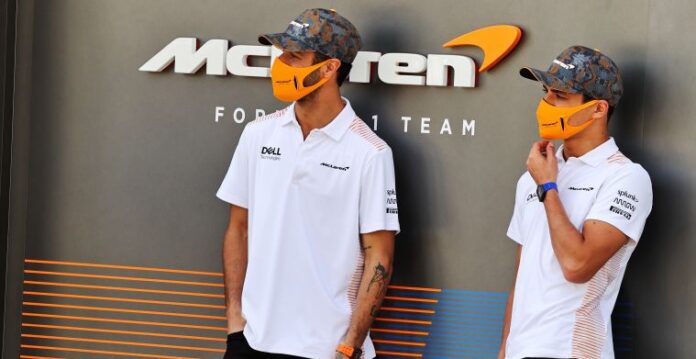 The Austrian Grand Prix was a tough race for Daniel Ricciardo but he managed to secure P7 on Sunday.

Even though the Australian managed to score some decent points for his team, his teammate Lando Norris was at the center of celebrations.

The Brit secured his third podium of the season finishing third and earning a bunch of points.

With the weekend now finally over, Ricciardo shared a tweet about the team after the race.

The Honey Badger was in a fix after he qualified P13 for the Austrian Grand Prix. Additionally, his teammate had already set the bar too high for him to compete.

However, Ricciardo was able to play the overtaking game and managed to cross the chequered flag at P7.

He even missed out on a P6 finish by merely two seconds.

While his result was what McLaren were hoping for, Norris’ win was the reason they began their celebrations.

Just three days after McLaren celebrated the Australian’s 32nd birthday on the paddock, he retweeted the team’s celebration with Lando.

“Love seeing this.” was the caption he used to describe the frenzy of celebration that took place thanks to the Brit’s win.

After the race at the Red Bull Ring, McLaren have solidified their third place in the constructor’s championship after scoring 21 points this weekend.

The Austrian Grand Prix was just a mere indication that McLaren are more than capable of scoring podium finishes.

However, for the time being, Norris is the only one who has been securing podiums and bringing consistent points for the Woking outfit.

For now, there are 14 races left with the next one at Silverstone where Ricciardo had made his debut back in 2011.

The Honey Badger will be looking to redeem himself on this track and try his luck for a podium finish.