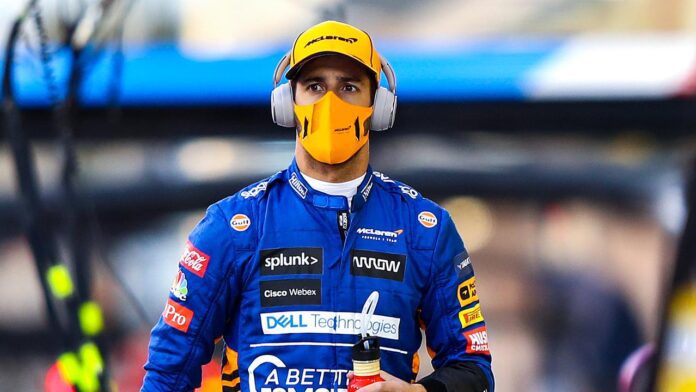 Daniel Ricciardo has revealed that he has not been setting a target of beating teammate Lando Norris during race weekends.

If he does so, he would end up ‘resenting’ Formula 1.

The Australian joined McLaren with several laurels to his name. However, he has failed to live up to the expectations of being the new benchmark in the team.

Unfortunately, Ricciardo has to spend every race weekend trying to come up with reasons on why he was unable to catch up to his teammate.

As a result, Ricciardo has ended up lowering his expectations against Norris, or else he will lose interest in the sport – something that has happened before.

“I feel like it’s obviously for whatever reason been a very unexpected and difficult season so far, just from a pace point of view,” Ricciardo told Motorsport.com.

“And I guess the easiest way for me to kind of move forward is to accept that. Did I expect more? Absolutely.

“But I think if I every weekend go into it now expecting to be quicker than Lando, or whatever it is, I’m probably just going to end up resenting the sport because clearly, it’s going to take a bit more.

“Clearly there’s something that is missing. I feel good in the car, especially the last three weeks, it’s felt better.

“I don’t want to say, what’s the word, wave the white flag, or succumb to whatever it is, I’m just going to not really focus or lose too much energy on that, and just accept that he’s driving very well.

“The aim is to obviously get closer, and help the team out as well,” he stated.

Ricciardo’s highlight performance this season was during the Austrian Grand Prix where he started from P13 and finished P7.

It is true that he cannot get excited over a handful of points, however, he has to make do with the fact that he has contributed to McLaren being third in the Constructors.

“Yeah, it was better,” Ricciardo said.

“I think it was just the day I needed. And for sure I would say for the team, the points, it was nice to get in seventh and get points for them.

“But I mean personally, right now obviously I’m not in a championship fight, so the points are, I don’t want to say irrelevant, but I think the important thing for me was just have fun, be in some battles, and put myself in a good position.

“And that’s what I did, and the end result was some points, which is nice. I just enjoyed it. Obviously, it’s been hard to fully enjoy it when the results have not been there, so I took a bit more fulfillment from the race,” he concluded.