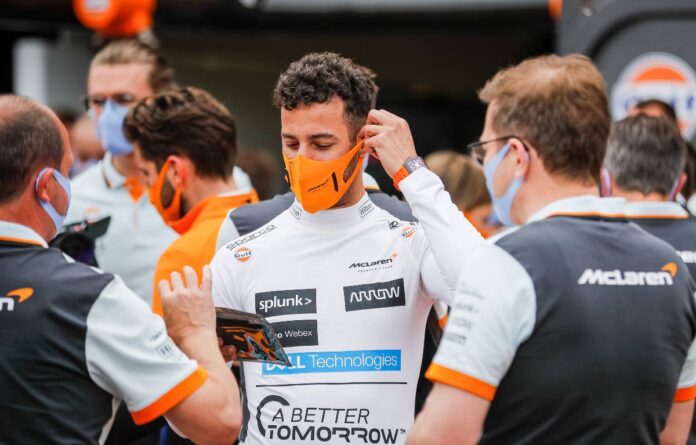 Daniel Ricciardo has oftentimes made it clear that he would like to win a world championship before he calls it quits.

Considering he is provided with the right tools, he has proved on numerous occasions that he is worthy of winning.

The Australian has mentioned that while it is still his goal to pursue a title win, he wants to get used to his tricky MCL35M car.

In a recent interview, Ricciardo was asked to imagine a scenario where he would have to retire without winning a world championship.

He made it clear that he races only because he likes it and is not in for just the numbers.

The McLaren driver also mentioned that he is grateful for the opportunity he got driving in Formula 1.

“I’ve never been asked that question because the truth is I race because that is what I want to do,” he said.

“I want to be World Champion and I’ve never said I race to make up numbers.

“I think I would still do it because you still have the chance to win races and still have some highs for sure.

“But I think if it ended for me today, obviously I’m not world champion, I’d still look back on this journey and be extremely grateful for it.”

Ricciardo: ‘I’d still do it’

He added, “I’ve had some amazing experiences, many highs and I think just life experience as well.

“Being able to travel the world and do what we do.

“So yes, the big trophy is why we do it but we’ve taken so much more from it on our way to trying to get there and even if we don’t get there, I think we still have a lot of fulfillment.

“I guess the answer is I’d still do it,” he concluded.

Ricciardo is currently at P10 in the driver’s championship as he heads into the French Grand Prix. We can only wait and see how the future turns out for the Honey Badger.

Read More: Haas would like to have an American driver in their arsenal – “There are a few guys in Formula 3”

Charles Leclerc frustrated with “bowling game” of a Hungarian GP