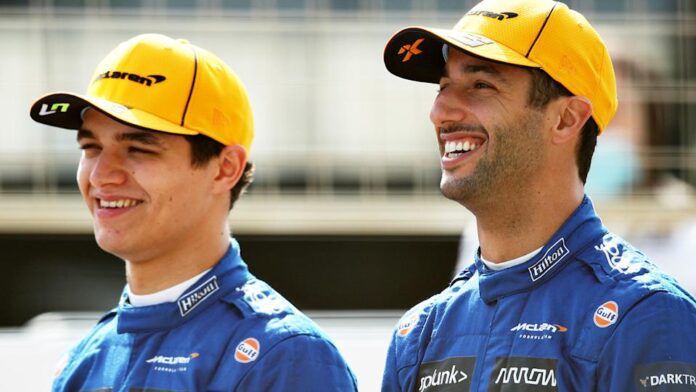 Lando Norris has had a great 2021 season so far with McLaren after being ahead of his teammate Daniel Ricciardo at every race so far.

However, Ricciardo is not the one to just sit around and has stated his desire to be the ‘top dog’ at the Woking-based outfit.

The French Grand Prix saw Ricciardo finish sixth while his teammate finished fifth, scoring a collective 18 points for the team.

This has helped them to push Ferrari away and take over third place in the Constructors’ championship.

After the race, Ricciardo said about Norris, “Yeah, he is certainly very good, so far he has had a very, very strong start to the season.

“I think he has had a bunch of Top-5s, obviously a couple of podiums. So he is really showing strong signs to be a top driver.

“Yeah, certainly pushing me it’s what I like. I enjoy it. Obviously, you always want to be the top dog, but good for me to learn, push and keep bettering myself,” he concluded.

The 31-year-old had signed his contract with McLaren with a lot of hope for the 2021 season. However, things have not been exactly working in his favor.

The Australian has failed to score top-5 finishes at every race and has also been outpaced by his teammate on all occasions.

However, Ricciardo believes that things will fall into place once he gets used to his Mercedes-powered car.

Things are already looking bright for him after the French Grand Prix where he managed to score eight points for the team.