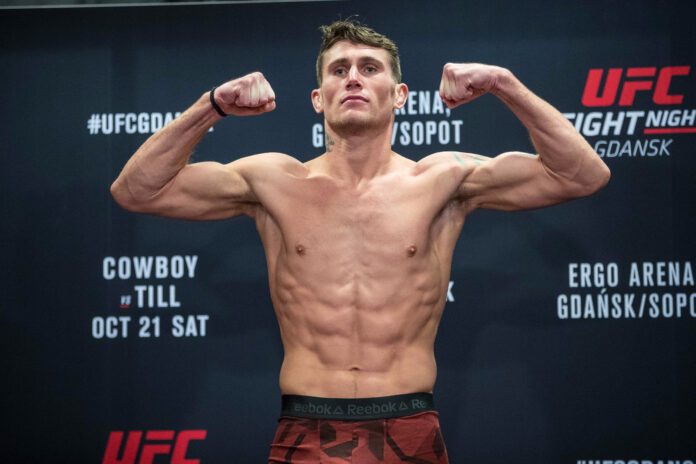 Darren Till (born December 24, 1992) is a former Muay Thai kickboxer and professional mixed martial artist from England. He currently competes in the Ultimate Fighting Championship (UFC) middleweight division and was a former UFC Welterweight Championship challenger. He is ranked #7 in the UFC middleweight rankings as of May 24, 2021.

Till was born and raised in Liverpool, England, where he was frequently involved in fights. He began Muay Thai training at the age of 12, and after dropping out of school at the age of 14 to focus on the sport, he turned professional a year later and began MMA training with Team Kaobon at the age of 17.

Till spent his adolescence living at several locations, including his gym and relatives’ homes, following an incident with his mother for which he was kicked out of the house. Till was stabbed twice in the back in August 2012 after confronting a big group of males at a party. Doctors stated he was lucky to be alive because the knife missed his main artery by a centimetre.

Despite his inability to speak Portuguese and his lack of grappling knowledge, he joined Astra Fight Team in Balneário Cambori. Till intended to spend six months in South America, but stayed for three and a half years and had a daughter with his Brazilian partner.

Till returned to England in late 2016 to rejoin Heron at Team Kaobon. Till’s daughter and then-girlfriend remained in Brazil, and he disclosed in 2018 that he hadn’t seen his daughter in over a year.

Till spent the majority of his early MMA career in Brazil, training with Astra Fight Team. He was 3–0 as an amateur in England before relocating to South America, where he turned professional in February 2013.

Till fought 11 fights in Brazil and one in Argentina before entering the UFC, with only two of them ending in a decision. He fought eight times as a middleweight in 2013 before switching to welterweight in late 2014.

Till made his UFC debut against Brazilian Wendell de Oliveira Marques on May 30, 2015, with only nine days’ notice at UFC Fight Night 67. He knocked out Oliveira to get his first UFC victory. Till’s next opponent was Nicolas Dalby, who he faced on October 24, 2015, at UFC Fight Night 76. The fight ended in a majority draw after a back-and-forth battle. Both contestants received the Fight of the Night bonus.

Till returned to the octagon on May 28, 2017, to face Jessin Ayari at UFC Fight Night 109, after missing time due to a serious shoulder injury and personal troubles. He was 5 pounds short of the non-title Welterweight limit of 171 pounds and was forced to pay his opponent 20% of his match earnings.

He added that he had missed weight owing to his lengthy absence from competition and that his body had not responded as well to the weight-loss procedure as it had in the past. Despite the arduous journey to the fight, Till won a unanimous decision (30–27, 30–27, and 29–27).

Till revealed on August 1, 2017, that he had signed a new five-fight contract with the UFC. Till fought Bojan Velikovi at UFC Fight Night 115 on September 2, 2017. Till’s unbeaten streak was extended by a unanimous decision.

Till fought Donald Cerrone at UFC Fight Night 118 on October 21, 2017. He won the fight through the first-round TKO. This overwhelming victory earned him the additional prize for Performance of the Night.

Till squared up against Stephen Thompson, a former UFC Welterweight championship challenger, at UFC Fight Night 130 in 2018. Till weighed in at 174.5 pounds, 3.5 pounds above the Welterweight non-title bout limit of 171.

After negotiations with Thompson’s side, the fight was set to take place at a catchweight with the restriction that Till not weigh more than 188 pounds on the day of the fight. Till also gave Thompson a third of his winnings.

Till was victorious in a close bout by unanimous decision. In terms of important strikes, he outstruck Thompson 38 to 30 and earned the fight’s lone knockdown in the fifth round. Despite this, 22 of 25 media outlets scored the fight in Thompson’s favour.

Till was given the opportunity to face Tyron Woodley for the UFC Welterweight championship at UFC 228 on September 8, 2018. After being dropped by the champion, he lost the bout by d’arce choke in the second round. Till suffered his first defeat in his MMA career.

Despite speculation about a possible transition to Middleweight, Till remained at Welterweight and faced Jorge Masvidal on March 16, 2019, at UFC Fight Night 147. Till was knocked out in the second round of the battle. Both contestants received a Fight of the Night bonus prize.

Till announced his return to the middleweight class on August 26th, when he will face Kelvin Gastelum at UFC 244 on November 2nd. He won the fight by a unanimous decision.

Till faced off against Robert Whittaker on July 26, 2020, at UFC on ESPN: Whittaker vs. Till. Till was defeated by Whittaker via unanimous decision, but many praised his performance against a former title holder.

Till was set to face Jack Hermansson at UFC on ESPN 19 on December 5, 2020. However, on November 6, it was reported that Till had been forced to withdraw from the fight due to an injury. Kevin Holland took his position, who was then succeeded by Marvin Vettori.

Till was stabbed in the back and left with two scars following a fight with “multiple bouncers and patrons” at a club during a party in August 2012. Till’s coach encouraged him to move to Brazil to complete his training after determining that life in Liverpool was detrimental to his development.

Despite initial plans for a six-month stay, he ended up living in South America for three and a half years. He speaks Portuguese really well. Till was arrested on 18 April 2019 in Tenerife, Canary Islands, for trashing a hotel room after being asked to leave, as well as hijacking a taxi cab as the driver was packing Till’s belongings into the trunk. Till and four other individuals were sentenced and fined roughly £10,000 for a crime of damage and unauthorised use of a car.

Read more: Darren Till net worth: How much is the UFC fighter worth?