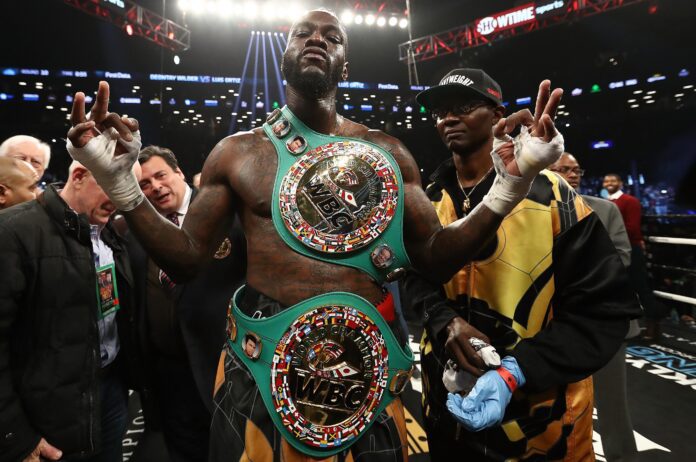 Deontay Leshun Wilder is a professional American boxer who held the WBC heavyweight title from 2015 to 2020 with ten defenses.

After winning the title, Wilder became the first American world heavyweight champion since 2004. This was the longest period in the history of boxing without an American title champion.

Wilder started his journey in Boxing at the age of 20. He also earned a bronze medal in the heavyweight division. This was during the 2008 Olympics.

As a result, he was given the title “The Bronze Bomber”. This was a name built on the foundations of Joe Louis who was famous as “The Brown Bomber”.

Known for his punching power, Wilder has knocked out every opponent he defeated.

He has a knockout-to-win percentage of 98%(third highest in heavyweight history). Wilder is also the recipient of the Ring magazine Knockout of the Year award back in 2019.

Wilder began boxing back in 2005 from the Skyy Boxing Gym in Northport, Alabama. He began his training under Jay Deas.

His match at the Golden Gloves saw the defeat of world champion Isiah Thomas of Detroit and his victory in the finals against David Thompson of Brooklyn.

Wilder also won against Quantis Graves at the U.S. championship. He then went on to win against southpaw James Zimmerman of San Jose, California with 31–15.

During the trials at the Olympics, he won over Graves two times. He won the trials in just 21 bouts.

Ultimately, Wilder qualified for the Olympics by defeating Deivis Julio 6:5. He also won against Jorge Quinones from Ecuador on double countback. Finally, he defeated Brazilian Rafael Lima 6:5 at the qualifier.

Deontay Wilder held on to the WBC heavyweight title from 2015 till the time when he was defeated by Tyson Fury in February 2020 through a knockout.

In a total of 43 fights, his draw against Fury from December 2018 was the only blemish on Wilder’s record before his loss in February.

His biggest payday came during his Fury rematch where he pocketed around $25 million.

Wilder is the father of eight children.

His first child was with ex-girlfriend Helen Duncan and was born in 2005. He also has two other daughters and one son with Jessica Scales-Wilder. Wilder married Jessica in 2009 but later divorced her.

He is currently engaged to Telli Swift and has a child with her.

Wilder hails from a family of preachers and has three sisters and one younger brother.

During his time in school, Wilder wanted to play football or basketball for his hometown but ultimately took to boxing.

Wilder has also revealed his struggle with depression and suicidal tendencies.

On May 4, 2013, Wilder and another woman were arrested by the Las Vegas police on account of battery at a hotel. He was held at the Clark County Detention Center and was charged with domestic battery by strangulation.

The woman was taken to the hospital where she was given treatment for her injuries.

Wilder’s attorney later revealed that he was regretful for his actions and that he had acted on instinct.