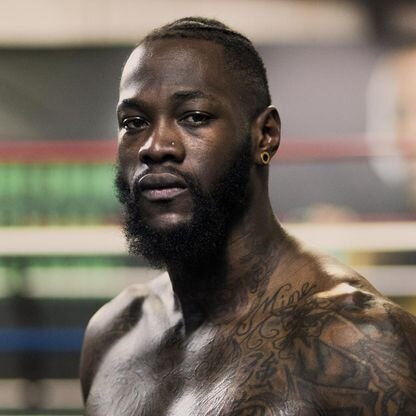 Deontay Wilder is a professional boxer from the United States. He is also a former WBC heavyweight champion.

He won a bronze medal in the heavyweight division as an amateur at the 2008 Olympics.

Wilder began boxing in October 2005, when he enrolled at Skyy Boxing Gym in Northport, Alabama, and began training with Jay Deas.

He defeated Graves twice more at the Olympic trials, winning the competition in only 21 bouts. In early 2008, he won a career-high win in Russia, defeating world championship silver medalist and future Olympic champion Rakhim Chakhiyev. He qualified for the Olympics by defeating Ecuador’s Deivis Julio Jorge Quinones on double countback and Brazilian Rafael Lima in the qualifier.

Wilder competed at heavyweight in the 2008 Olympics, defeating Algeria’s Abdelaziz Touilbini and Morocco’s Mohamed Arjaoui before falling to Italy’s Clemente Russo in the semi-finals to earn a bronze medal. Wilder had a amateur record of 30–5.

Wilder made his professional debut on November 15, 2008, at the age of 23, at the Vanderbilt University Memorial Gymnasium in Nashville, Tennessee. He defeated Ethan Cox (2-2-1) by technical knockout (TKO) in the second round after knocking him down three times. Wilder fought seven times in 2009, winning all of them in the first round.

Wilder won his first professional boxing title on December 15, 2012, when he knocked out 37-year-old Kelvin Price (13-0, 6 KOs) at the Memorial Sports Arena in Los Angeles.

WBC #14 Eric Molina (23-2, 17 KOs) was announced as Wilder’s opponent shortly after. Molina wanted to be the first Mexican-American world heavyweight champion in history.

It was announced that the event was sold out with a total attendance of 9,347 people. Wilder dominated, knocking down Molina near the end of round four, twice in round five, and again in round nine, knocking him out onto his back.

Showtime confirmed in December 2015 that Wilder had agreed to defend his WBC title against Polish boxer Artur Szpilka (20-1, 15 KOs) on January 16, 2016, at the Barclays Center in Brooklyn, New York.

On July 30, it was reported that negotiations were underway for a fight between former unified heavyweight world champion Tyson Fury (27-0, 19 KOs) and Wilder to take place in either November or December 2018. On July 31, Fury stated that the fight with Wilder was 99 percent set, with only a location and date to be determined.

Wilder and Fury fought to a twelve-round split decision draw in front of 17,698 fans at the Staples Center, ensuring Wilder retained his WBC title. According to CompuBox statistics, Wilder landed 71 of 430 punches thrown (17 percent), while Fury landed 84 of his 327 thrown punches (26 percent ).

Despite being the slight betting favourite going into the fight, Fury dropped him in the third round with a left hook, overhand right combination. Fury knocked Wilder out again in the fifth round, this time with a body shot. Wilder eventually lost the fight by technical knockout in the seventh round.

On May 17, 2021, arbitrator Daniel Weinstein ruled that Tyson Fury must honour a contractual clause requiring a third fight with Wilder. Following that, Fury’s promoter Bob Arum claimed that the Allegiant Stadium in Las Vegas had been reserved for Wilder’s trilogy fight with Fury on July 24, 2021. The venue was officially confirmed as T-Mobile Arena in Las Vegas ahead of their pre-fight press conference on June 15.