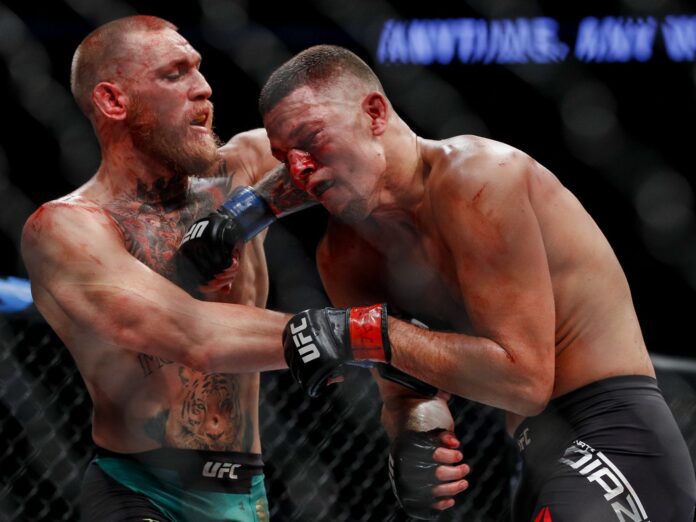 Nate Diaz has taken a dig at Conor McGregor, and the Irishman has responded.

Diaz and McGregor have had a storied rivalry. The two fought twice, at UFC 196 and at UFC 202. It’s one a piece for both fighters, and a stalemate at the moment.

Diaz took the win in their first encounter, beating McGregor with a rear-naked choke in the second round of the fight. The rematch saw McGregor prevail by the tightest majority decision against Diaz, after fighting long and hard for 25 minutes. The fight lasted five rounds, and was one of the bets fights in recent memory.

ESPN posted a photo to celebrate the fifth anniversary of the second Diaz-McGregor fight. They captioned the photo with a line that suggested that on that day, McGregor evened things up that night in Las Vegas. Diaz took exception to the caption, and took a dig at McGregor while replying.

After slugging it out for five rounds, McGregor would even the score in the final fight of their epic series… for now. pic.twitter.com/OPVCWoc0g1

“He got finished off with a choke. That last fight didn’t even thangs out. He’s still far behind but it’s Gucci,” Nate Diaz replied to the post.

Diaz’s burn was good, but everyone expected the king of trash talk to bury him in is reply. However, McGregor opted for a short and sweet response. The Notorious did not roast the daylights out of the Stockton Slugger, but wished him a happy anniversary.

McGregor is currently on the sidelines after losing a fight and the trilogy to his rival Dustin Poirier at UFC 264. The fight saw him emerge with a broken leg, and he is currently recovering from it.

Diaz, meanwhile, competed in June at UFC 263. There, he lost a very close fight by unanimous decision to Leon Edwards. Edwards dominated the initial minutes, but Diaz mounted a comeback, which was in vain.

“One of the greatest fights I’ve ever seen”: White confirms UFC...

“Something to look forward to”: UFC set to bring Walker and...