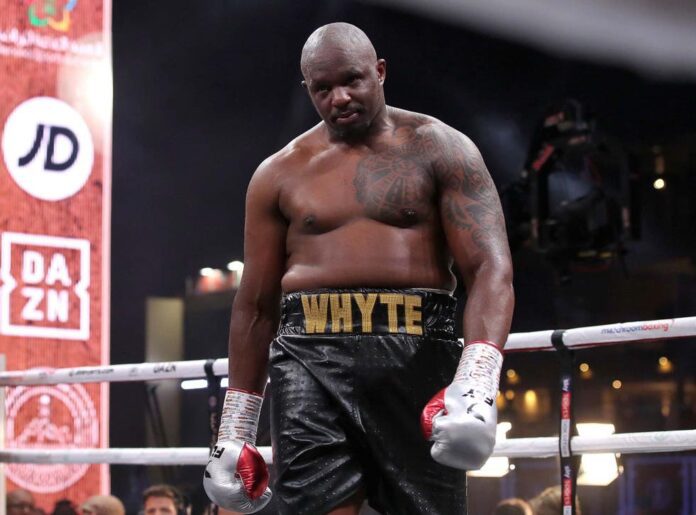 Dillian Whyte is a professional boxer from the United Kingdom, as well as a former kickboxer and mixed martial artist.

Whyte was born on April 11, 1988, in Port Antonio, Portland, Jamaica. Whyte migrated to the United Kingdom with his family when he was 12 years old in the 1990s. Patrick Whyte, his paternal grandpa, was an Irishman who immigrated to Jamaica from Dublin, Ireland.

Whyte has also mentioned having his first child at the age of 13. Whyte has boasted of his academic performance in school in England, while noting, “I had no schooling at all when I lived in Jamaica.” As Whyte often stated on iFL TV, growing up in Jamaica was difficult, with him “dodging bullets” and being exposed to situations that no child his age should be exposed to.

Whyte was raised in Brixton, London, and trained at Miguel’s Boxing Gym. He had previously stated that boxing had had an impact on his early life.

“To be honest, I didn’t perform well in school, but boxing saved me and altered my life. And everything was going swimmingly since I felt it was my best shot in life.”

Since March 2021, he has held the WBC interim heavyweight title, which he previously held from 2019 to 2020. He has held several regional heavyweight titles, including the British belt from 2016 to 2017. He is ranked as the world’s fifth-best active heavyweight by The Ring magazine, and seventh by BoxRec and the Transnational Boxing Rankings Board as of December 2020.

Whyte began his career as a professional kickboxer, becoming a two-time British heavyweight kickboxing champion by claiming the BIKMA super-heavyweight British title, and a one-time European K1 champion, while being ranked UK #1 for five years in his weight category of 95 kg +, ending his kickboxing career with a K-1 record of 20–1.

Whyte made his professional MMA debut on December 6, 2008, at the Ultimate Challenge MMA, on the undercard of James McSweeney vs. Neil Grove, when he defeated Mark Stroud with a tremendously devastating right cross barely 12 seconds into the round; eventually won by knockout (KO) at The Troxy.

Whyte defeated Anthony Joshua by unanimous decision (UD) over three rounds in his first amateur fight in 2009 when he was 20 years old. Prior to the bout, he revealed that his trainer, Chris Okoh, admitted that agreeing to the fight was a risk, while finally accepting the fight, to which Whyte stated, “But I told them I’d take it. Sometimes you just have to seize opportunities as they present themselves.”

Due to a KO, he put one of his amateur opponents in a coma for several weeks.

Whyte had a restricted amateur record (6–0–0, 5 KOs) due to a dispute with the ABA over his kickboxing background, which caused him to turn professional in 2011, despite trainer Okoh’s wishes for him to remain amateur.  After friends of boxing promoter Frank Maloney observed Whyte sparring sessions with David Haye and former UFC light-heavyweight champion Quinton Jackson, Whyte signed with Maloney.

On 14 September 2015, it was announced that Whyte would face old adversary Anthony Joshua for the vacant British heavyweight title on Sky Sports Box Office on 12 December at The O2 Arena in London.

Joshua was able to use his power to damage Whyte in the opening round. In the second round, he appeared to be hurt again, but he was able to catch Joshua with a counterpunch and follow it up, leaving Joshua clearly worried.

Whyte also hit a number of body blows near the finish of the round. This was evident in the third round, with Joshua still looking fatigued and stiff-legged. As the rounds progressed, Joshua regained his composure and took command.

On September 19, it was announced that Whyte would face domestic veteran Ian Lewison for the vacant British heavyweight title on the undercard of Ricky Burns vs. Kiryl Relikh on October 7 in Glasgow.

At the weigh-in news conference, Whyte and Lewison had to be separated. Both fighters have vowed knockouts. Whyte defeated Lewison in the tenth round to win the vacant title. Lewison’s corner stopped the fight in round ten. The battle was called off because he appeared to have a nasal condition.

Although Lewison looked strong from the outset, Whyte began to take control in round three. Lewison turned his back and began blowing his nose in round eleven.

Whyte has two boys and one daughter. He had his first kid at the age of 13, making him one of the youngest birth dads on record. He has spoken about his early boxing inspirations, including Jack Dempsey, Sonny Liston, Archie Moore, Lennox Lewis, and James Toney.

Read more: Dillian Whyte net worth: How much does professional boxer make through salary and deals?