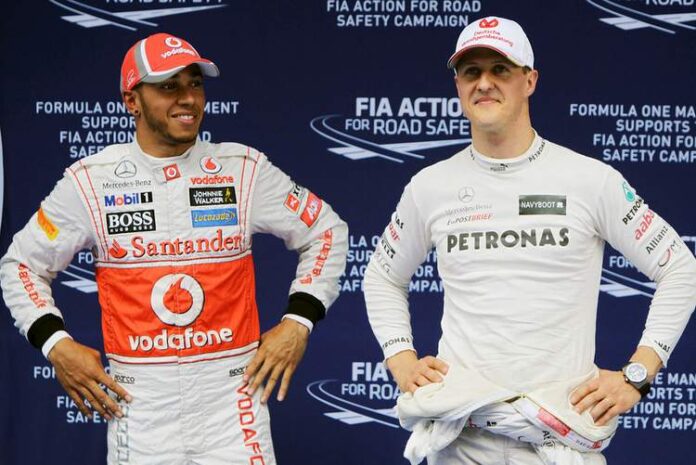 Formula 1 is a sport of utter precision. A driver has to constantly remain focused while maintaining high speeds as even a small mistake can be costly.

In a span of just two hours, there is a lot that a driver has to do.

Many F1 fans have a question on what drivers do when nature calls. Do they just go in their suits?

Yes, drivers have the option of going in their suits if they want to. While many have confessed to doing so, there are others who try and refrain from this.

Lewis Hamilton has revealed that he has never gone in his suit. He goes on to say that he would not be able to even if he tried.

“You’re supposed to go in your suit, but I can’t do it. I’ve never done it. But there are drivers that do,” he said.

There is a paddock rumour that Michael Schumacher would pee in his suit. Hamilton mentioned that Schumacher’s mechanic claimed that he would pee in almost every race.

However, that fact is yet to be verified.

“The driver that used to drive for the team, was Michael Schumacher. I don’t know if anyone’s heard of him, but legend racing driver. My mechanics told me he peed every single time he was in the car,” Hamilton added.

What happens during a race?

Throughout the race, F1 drivers are just speeding towards their next corner at extremely high speeds. There is a lot of focus that is involved in doing this for 2 hours.

Peeing into their suit would probably be the last thing on a driver’s mind.

There is the issue of wanting to drink water.

Drivers have a button on their steering wheel that provides them with water in their helmets. This allows them to stay hydrated during a race.

Interesting facts about what happens in the cockpit

The car is built in such a way that it sits between the engine and other parts. As a result of high speeds, the temperature in the cockpit might go up to 50°C.

Therefore, the drivers wear special suits that can help them endure such high temperatures.

Another interesting fact is that a driver can lose up to 10lbs. This is mainly due to excess sweat and dehydration.

Even though there are pitstops during a race, a driver cannot stop for drinking water or using the bathroom.

“We were spending more”: McLaren boss weighs in on how budget...