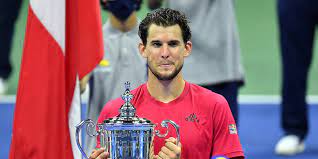 Dominic Thiem is an Austrian professional tennis player who was born on September 3, 1993. The Association of Tennis Professionals has him ranked as high as world No. 3 in singles, which he first attained in March 2020.

He is the second-highest-ranked Austrian player in history, behind Thomas Muster, the former world No. 1. He has 17 ATP Tour singles championships, including a Grand Slam title at the 2020 US Open, where he defeated Alexander Zverev in the final after coming back from two sets down.

Dominic Thiem, an Austrian tennis player, is noted for his high-octane performance and dazzling groundstrokes. Thiem has proven to be a formidable opponent on clay. When Rafael Nadal retires, many expect the next-gen star to take over the French Open.

He became the first member of tennis’ new generation to win a Grand Slam when he won the US Open in 2020.

As a result, he became the first new men’s singles Grand Slam winner since Marin Cilic in 2014.

Thiem then advanced to the quarterfinals of the 2020 French Open, where he was defeated by Diego Schwartzman. After reaching the final of the ATP World Tour Finals, he finished the season on a high note.

On his way to the final, he beat both Rafael Nadal and Novak Djokovic.

Thiem had finished runner-up to champion Rafael Nadal both times at Roland Garros.

He was defeated by Novak Djokovic in a nail-biting match at the Australian Open. He had also overcome his arch-rival Rafael Nadal on his way to the finals.

In 2019, he won one of his most significant victories when he defeated Roger Federer in the finals of the Indian Wells Masters. He also advanced to the finals of the 2019 ATP World Tour Finals, losing to Stefanos Tsitsipas.

Thiem has shown the world that Rafael Nadal is not invincible on clay by defeating him on several occasions. On other surfaces, he is also showing indications of improvement. Thiem has 17 ATP titles to his name, the majority of which he has won on clay, but one on grass and six on hard courts.

Thiem surpassed Roger Federer to reach a career-high ranking of World No. 3 in the first week of March 2020.

The 26-year-old is supported by a few sponsors, but he is still young and will undoubtedly get more as his career advances. Adidas, Babolat, Bank Austria, Rolex, Red Bull, Duravit, Technogym, and Sky Sport are among his sponsors.

Thiem, like every other tennis player and sports figure, gives back to the community.

Thiem contributed to La Fondation Prince Albert II de Monaco alongside players such as Novak Djokovic, the Zverev brothers, Grigor Dimitrov, and others. This organization is dedicated to environmental preservation and sustainable development.

Rafael Nadal withdraws from US Open due to injury

Emma Raducanu’s dominance in the US Open 2021