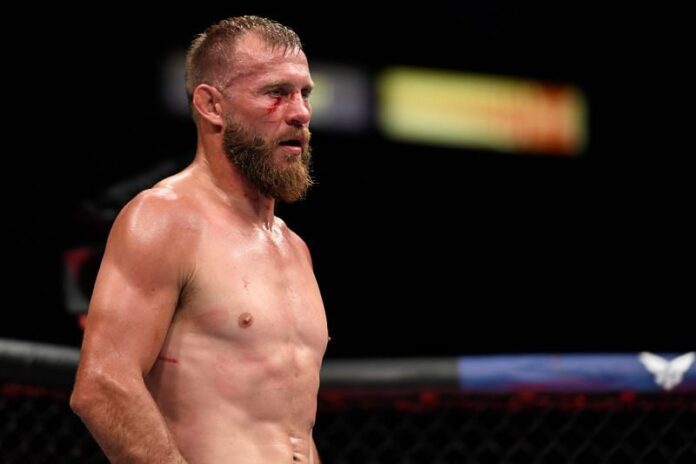 He is popularly known by his nickname ‘Cowboy’.

Cerrone is an American and famous as a mixed martial artist and also as a formal professional kickboxer.

At the moment, he fights for the Ultimate Fighting Championship in the welterweight category.

Back on November 10, 2018, Cerrone recorded the most wins in UFC history (21) after he surpassed Georges St-Pierre and Michael Bisping.

Additionally, he also recorded the most finishes in UFC history (15) after surpassing Anderson Silva and Vitor Belfort.

At the UFC Fight Night 143 on January 19, 2019, Cerrone defeated Alexander Hernandez. As a result, he was able to increase his UFC win record total and his UFC record for most finishes to 22 and 16 respectively.

He also tied the record for most bouts claiming 33 in the organization.

With that number, he was able to beat a record that was set by Nate Diaz and Joe Lauzon.

Cerrone, being of Irish and Italian descent, was born in Denver, Colorado.

While he was young, he was diagnosed with ADD (Attention Deficit Disorder). However, he never received any treatment for it.

As a child, he would often get into fights with others.

While he was attending Air Academy High School, he picked up professional bull riding.

After his parents got divorced, he went on to live with his grandparents.

Cerrone, at the age of 20, began to train in kickboxing. Later he also picked up Muay Thai.

He was able to win a few competitions which allowed him to pursue a career in Mixed Martial Arts.

Donald Cerrone has been a part of the UFC roster since 2011. He mainly fights in the lightweight and welterweight divisions and puts on a great show.

Surprisingly, he has never won a UFC title during his time in the sport. However, he has been involved in a few highly memorable fights.

Cerrone had been fighting for the UFC lightweight title back in 2015 and had been involved in some big fights by 2020.

Despite that, he had never been a part of the main event of a UFC pay-per-view.

Everything changed for him with UFC 246 where he was handed the biggest opportunity of his career.

Cerrone was matched up against the biggest star in UFC – former UFC featherweight and lightweight champion Conor McGregor.

This was Cerrone’s biggest payday match.

The match was hyped up to be the biggest in UFC history.

On one hand, McGregor was able to bring in many fans. But on the other, Cerrone’s past performances helped him bring in over a million buys.

Unfortunately, Cerrone was unable to perform as he fell victim to McGregor and lost in under a minute.

But it did not matter as he was a part of the biggest fight in UFC history.

UFC Fight Night 139 was a part of UFC’s 25-year anniversary and the location was Cerrone’s birthplace of Denver, Colorado.

Therefore, it only made sense for him to be involved.

But the Cowboy, at that moment, had just one win in five fights and had started to look past his prime.

He was paired with power puncher Mike Perry for their welterweight clash.

While few expected him to win, amidst cheering by his hometown fans and his family, Cerrone gave a stellar performance that would be highly memorable in his career.

He was able to cause damage to Perry but was pinned down by him. However, he was able to showcase his ground game and was immediately on the top.

At that moment, he took Perry’s back and forced him to tap out after a picture-perfect armbar.

His win resulted in Cerrone’s UFC career being back on track and also gave him the record for the most wins along with the most finishes in UFC history.

UFC used to go with the tagline “as real as it gets,” in contrast to fights that were pre-determined.

However, once in a while, there are moments where even UFC fights seem to look staged.

Cerrone had already managed to win the first round thanks to his pinpoint striking. But not once did anyone imagine what would happen the next.

With just three minutes remaining, Cowboy managed to slip a left hand from Story. But he followed that moves straight out of an old-school Mortal Kombat game.

Story had to endure a left hand, a right body shot, another left, a head kick, and finally a barrage of shots that left him TKO’ed.

There are instances where a fighter can learn a lot more from a loss than from a win.

This is exactly what happened when Cerrone faced off against Nate Diaz.

The fight was already hyped up after Diaz knocked down Cerrone’s cowboy hat during the staredown.

When the fight began, Diaz hit Cerrone pretty hard which would have caused any other fighter to fold.

Even after suffering a broken jaw, Cerrone refused to go down easy.

He had to endure more punishment in the second round after he flipped Diaz off by giving him a taste of his own medicine.

Cowboy actually won the third round by landing low kicks on Diaz and even dropping him twice.

However, when the fight ended, it was clear who would take home victory.

This performance of Cerrone made him a bigger UFC star than he was before.

Cerrone and his fiancée Lindsay have a son together, Dacson Danger Cerrone. He was born on June 29, 2018.

On Valentines Day of 2020, Cerrone disclosed that he is expecting a second child.

Cerrone is also good friends with Rob McElhenney, the creator of It’s Always Sunny in Philadelphia. Cerrone along with Paul Felder and Dana White made an appearance in one of its episodes.

Back in 2014, Cerrone was accused of spewing racist comments about black people by UFC lightweight fighter Bobby Green. This was during a deleted interview with Ariel Helwani.

Cerrone, however, dismissed these claims and said that he would not have three black guys live with him if he was racist.

UFC bantamweight champion Aljamain Sterling has also come forth with similar accusations against Cerrone back in 2016.

Additionally, Cerrone has riled up controversy on his use of anti-black racial slurs on his social media posts.

Bobby Green has also accused Cerrone of sexually harassing his female fans back in 2014.

Yet again, Cerrone denied these accusations.

Cowboy has also been accused of using transphobic and homophobic comments in public.

He has also been sponsored by Hoelzer Reich, an organization that has far-right extremist views and has been banned by UFC.