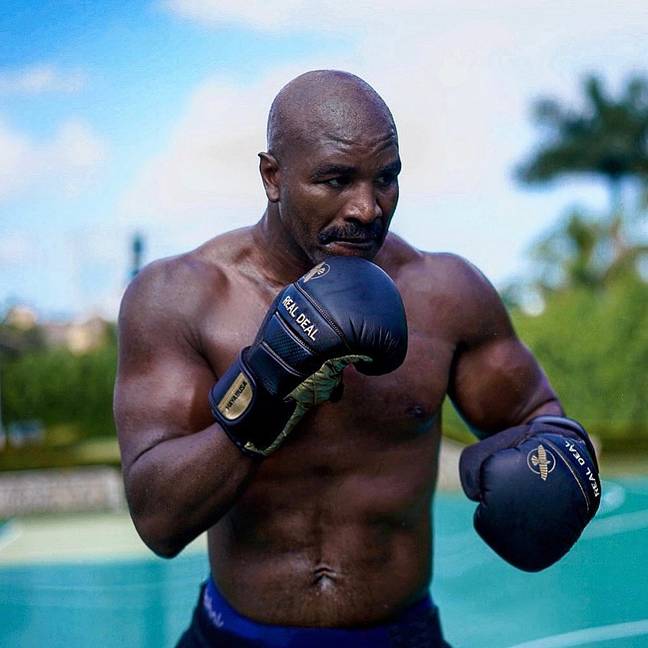 Evander Holyfield is a former professional boxer from the United States who competed from 1984 to 2011.

Evander Holyfield was born in the mill town of Atmore, Alabama, on October 19, 1962. Holyfield, the youngest of nine children, was much younger than his other siblings and was born to a different father. Holyfield’s family eventually relocated to Atlanta, Georgia, where he grew up in the gang-infested Bowen Homes Housing Projects.

He began boxing when he was seven years old and won the Boys Club boxing tournament. He qualified for his first Junior Olympics when he was 13 years old. By the age of 15, Holyfield had won the Southeastern Regional Championship and the Best Boxer Award. By 1984, he had a record of 160 wins and 14 losses, with 76 victories coming by knockout.

Holyfield represented the United States at the 1983 Pan American Games in Caracas, Venezuela, when he was 20 years old, winning a silver medal after losing to Cuban world champion Pablo Romero.

The next year, he won the National Golden Gloves Championship and a bronze medal at the 1984 Summer Olympics in Los Angeles, California, following a contentious disqualification in the second round of the semi-final against New Zealand’s Kevin Barry.

On November 15, 1984, Holyfield made his professional debut as a light heavyweight with a televised six-round victory over Lionel Byarm at Madison Square Garden.

On January 20, 1985, he defeated Eric Winbush in a six-round decision in Atlantic City, New Jersey. He knocked out Fred Brown in the first round in Norfolk, Virginia, on March 13, and Mark Rivera in two rounds in Corpus Christi, Texas, on April 20.

On July 20, 1985, in Norfolk, Virginia, he and his next opponent, Tyrone Booze, both stepped up to the cruiserweight class for their battle. Holyfield defeated Booze in eight rounds. On August 29, in his hometown of Atlanta, he knocked out Rick Myers in the first round.

On October 30 in Atlantic City, Holyfield knocked out opponent Jeff Meachem in five rounds, and his final fight of 1985 occurred on December 21 in Virginia Beach, Virginia, against Anthony Davis. He triumphed by knocking Davis out in the fourth round.

Holyfield won the world title by a narrow 15-round split decision over Qawi in what The Ring deemed the best cruiserweight fight of the 1980s. He finished 1986 with a trip to Paris, France, where he knocked out Mike Brothers in three rounds in a non-title bout.

Holyfield had another excellent year in 1988, beginning with winning the first widely acknowledged World Cruiserweight Champion after defeating Lineal & WBC Champion Carlos De León in Las Vegas. The bout was called off after eight rounds.

In 1989, Holyfield met another former Heavyweight Champion, Michael Dokes. Ring magazine named this battle as the best heavyweight match of the 1980s, and it was named one of the top fights of the 1980s.

Holyfield won via knockout in the tenth round, and he went on to face Brazilian Champion Adilson Rodrigues, who lasted two rounds. He fought Alex Stewart, a hard punching fringe contender, in his final bout of the 1980s. Stewart stunned Holyfield early on with swift, forceful punches, but he finally lost in eight rounds.

In 1990, Holyfield knocked out Seamus McDonagh in four rounds. By this point, Holyfield had been Ring Magazine’s top contender for two years and had yet to face Tyson for the Heavyweight title.

In 1990, Holyfield was guaranteed a title fight versus Tyson. Before the match could take place, in what many regard as the biggest upset in boxing history, virtually unknown boxer, 29-year-old, 231 lb. Buster Douglas fought Mike Tyson, a 23-year-old 218-pounder, in ten rounds in Tokyo to become the new undisputed heavyweight champion. Instead of facing Tyson, Douglas’ first championship defence was against Holyfield.

On October 25, 1990, they met. Douglas weighed 246 pounds when he entered the fight and offered little against Holyfield, who was in great shape at 208 pounds. Douglas attempted to launch a combination in the third round with a huge right uppercut. Douglas was knocked down for the count as Holyfield reacted with a straight right hand. Holyfield has become the world’s new unbeaten and undisputed heavyweight champion. Holyfield was up on all three judges’ scorecards at the time of the knockout, with all three seeing it 20–18 for Holyfield.

Holyfield had a fantastic year in 1996. First, he faced former world champion Bobby Czyz, whom he defeated by knockout in six rounds. Then he finally met Mike Tyson.

Tyson had reclaimed the WBC and WBA Heavyweight titles and, after being stripped of the WBC belt for failing to face Lennox Lewis, defended the WBA title against Holyfield on November 9, that year. Tyson was a heavy favourite to win, but Holyfield stunned the world by defeating Tyson in the 11th round via TKO. This was Holyfield’s third time winning the WBA Heavyweight title. However, the battle was not recognised as a fight for the lineal championship, which was held at the time by George Foreman.

The rematch between Holyfield and Tyson took place on June 28, 1997. It became known as “The Bite Fight” and went down in boxing history as one of the most strange battles ever. The iconic event happened in the third round, when Tyson bit Holyfield on one of his ears and was docked two points.

Mills Lane first wanted to disqualify Tyson, but after Holyfield and the ringside doctor intervened and stated Holyfield could continue, he relented and allowed the bout to continue. Tyson bit Holyfield once more, this time on the opposite ear. Tyson’s teeth ripped a small portion of the top of his opponent’s ear, known as the helix, and spat it out onto the mat.

Evader is the father of 11 children by six different women. He is a born-again Christian who has been involved in Christian charity work for many years. Evander Holyfield’s financial problems were revealed in 2008, and his house was auctioned off. Despite earning $513 million during his boxing career, he was declared bankrupt and flat broke in 2012. In 2007, he was accused of using steroids and HGH.

Read more: Evander Holyfield net worth: Was he able to overcome the financial crisis and what’s he worth in 2021?