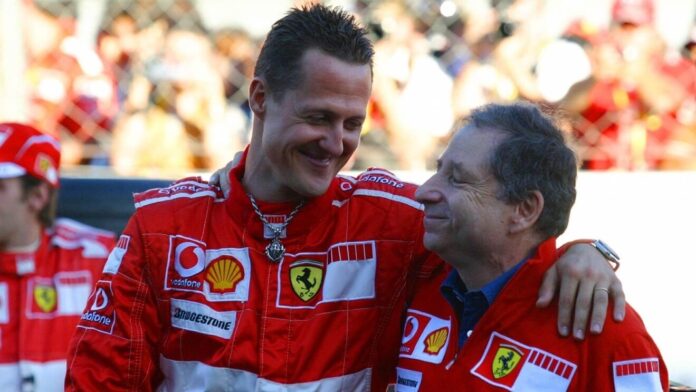 Todt, during an interview with the Italian outlet Corriere della Serra, said that he sees Schumacher “at least twice a month”.

“Him, Corinna, the family — we’ve had so many experiences together.

“The beauty of what we have experienced is part of us and it goes on.”

Have many commitments: Todt

Todt was asked about his future after he retires as the president of the FIA.

“I have plenty of commitments,” Todt said.

“Road safety for the UN, president of Aung San Suu Kyi’s foundation, and then the International Peace Institute.

“I’m on the boards of banks, cinemas, and hotels. And I am proud to have created the Brain and Spinal Cord Research Institute, to which Michael Schumacher contributed.”

Schumacher and Todt had a significant partnership that allowed the German to win seven world championships during his decade-long career with Ferrari.

This was a major record until it was equaled by Lewis Hamilton back in 2020.

After a major skiing accident in 2013, there has been almost no information regarding Schumacher’s health.

Renowned neurosurgeon Erich Riederer had revealed last year that the German was in a ‘vegetative state’. However, there have been no more details apart from this.

The biggest reason for the mystery around Schumacher is his wife Corinna. She has done her best to avoid the media and kept the matter private.

In a rare statement to the media, she revealed that the family was just following Schumacher’s wish to maintain his privacy.

What did Corinna say?

“You can be sure that he is in the very best of hands and that we are doing everything humanly possible to help him,” the statement said.

“Please understand if we are following Michael’s wishes and keeping such a sensitive subject as health, as it has always been, in privacy.”

Corinna has been spending time with Schumacher in Switzerland as he heals from his injury.

Read More: Lando Norris furious over Daniel Ricciardo ‘wave’ accusation – “Did it to freaking everyone”