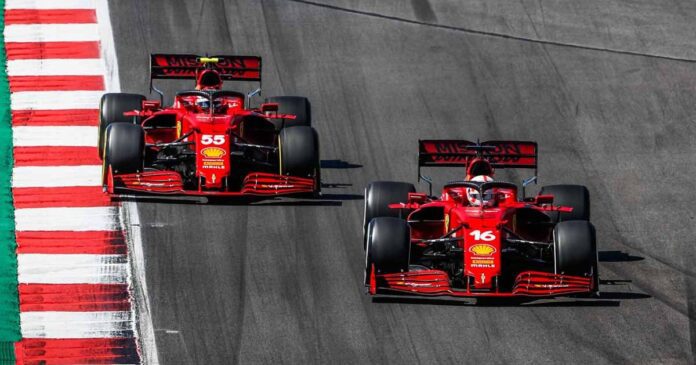 Ferrari has confirmed a grid penalty for Carlos Sainz, and they have also announced that Team Principal Mattia Binotto will miss the Turkish GP.

Sainz will take the penalty because he will be getting Ferrari’s all-new engine in Turkey. This comes on the heels of Charles Leclerc taking the new engine at the Russian GP.

As a result, Sainz will start the race from the back on the grid. This was confirmed by the team in a statement. Ferrari confirmed a grid penalty for Sainz, and also revealed that Binotto is set to miss the Turkish GP

“As was the case for Charles Leclerc in Russia, in Turkey Carlos Sainz will take a completely new power unit fitted with the new hybrid system,” the team statement read, as reported by Grandprix247.com.

“Therefore he will start from the back of the grid with the aim of climbing up the order to try and score some points.

“Mattia Binotto will not attend the Turkish Grand Prix, but as was the case several times last year, the Team Principal will be based in the Maranello factory to focus on development of next year’s car.

“He will of course follow all sessions and the race from the Remote Garage, with a permanent link to the team at Istanbul Park,” the statement concluded.

Ferrari already have one foot out the door this season, with their focus being their car for 2022. However, they are very much in the running for P3 in the Constructors’ Championship. Although McLaren are ahead of them at the moment, Ferrari can make a comeback.

Binotto will skip the race to oversee the development in the Ferrari factory. He won’t be at the Istanbul Park to lead the team’s efforts there.

Read more: Sainz admits he is not fully comfortable at Ferrari – “Not 100% at home in the car”

Mazepin feels Schumacher holds unfair advantage over him – ‘Mick has...

Technical glitch cost Leclerc points in Imola – “He thought the...