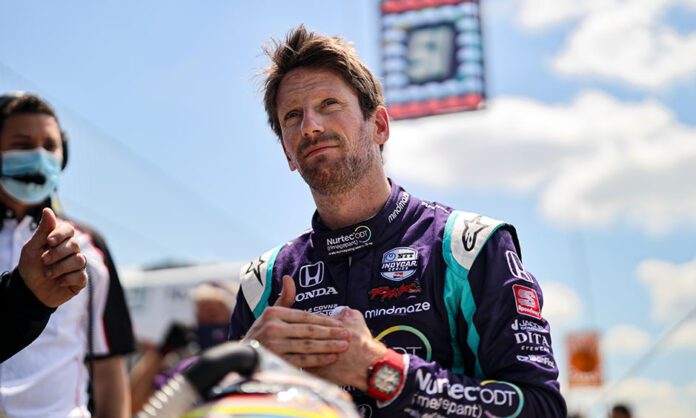 Romain Grosjean talked about Sebastian Vettel visiting him in the hospital, and how he interacted with him in there.

The world prayed as one as Grosjean spun off the track at the 2020 Bahrain GP and crashed in to the barrier, with his car bursting into flames. Seconds passed before the Frenchman escaped the blaze to the relief of everyone.

Although he seemed okay, he was taken to the hospital after suffering a few burns and a torn tendon in his left thumb. The Frenchman was visited by Vettel at the crack of dawn, who was concerned for him.

In his autobiography ‘La Mote En Face’, Grosjean talked about Vettel visiting him in the hospital, and revealed what the two drivers talked about.

“Someone arrived very early and in a rather unexpected way: Sebastian Vettel. He was worried about me.

“Seb is probably the driver that I feel closest to. He is living the same life as me with his three children and wants to protect that life as much as possible.

“When I told him I wanted to race the last race, he said, ‘No, you need to go home and rest!’ I explained to him that it was the end of my career and that I did not want to end this way.”

Not meant to be

The former Haas driver spoke about how he tried to recover for the season finale in Abu Dhabi. However, it wasn’t meant to be, as he was forced into an early retirement.

Speaking to L’Equipe after his crash, he said, “I actually started working (on Tuesday) evening with my psychologist. But my desire, immediately, was to get back into an F1 car.

“I thought of Abu Dhabi – sorry Marion (Grosjean) – but I need it for myself: to know if I am capable of it, know what I’m going to feel, how I’m going to react.

“I have to do everything to try to get back in the car. If the doctors tell me it’s not possible, I will listen to them but I must try to come back up. I must be selfish,” he concluded.

Magnussen reveals Williams’ intention to sign him – “Had to find...