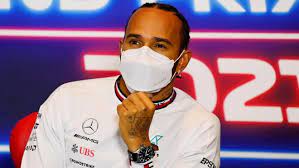 Social media is a platform where it takes a lot of time to build up an image, but a second to make yourself look like a fool. Even someone as prominent as Hamilton isn’t safe from the risk of a complete goof-up. That is precisely what happened recently, and it wasn’t the Mercedes driver’s finest hour.

On his Instagram, Hamilton posted a picture of him lying on the couch with his dog Roscoe. Roscoe has a pet account for himself on Instagram. Hamilton wanted to tag him in the post. Unfortunately, he messed up and tagged Russell’s account instead.

Fans were quick to spot Hamilton’s error, and trolled him for it. A few minutes after he had posted the picture, he changed the tag to Roscoe’s current account. However, he deleted the photo later. Nevertheless, he became the butt of many jokes, with one comment summing it up perfectly – “That’s one way to confirm Russell for the seat in 2022!”

What makes this so deep is the fact that Russell is heavily linked with a move to Mercedes. This will see him partner his fellow British driver in Hamilton, while his current teammate Valtteri Bottas will leave the team.

Till now, Mercedes, Hamilton, Bottas or Russell haven’t dropped any hints about the potential transfer. However, many are prodding deeper into Hamilton’s post, saying this could indeed be the first sign. The suspicions were raised when Hamilton deleted the post. By that time however, the damage had been done.

It just shows you that social media is a platform you need to respect and tread lightly on. It only takes a few moments for your actions to go viral. Half the time, the consequences of that are not going to be good. In the case of Hamilton, we can only speculate that he deleted the post out of embarrassment.

Angela Cullen pens down an uplifting tribute to Lewis Hamilton after...