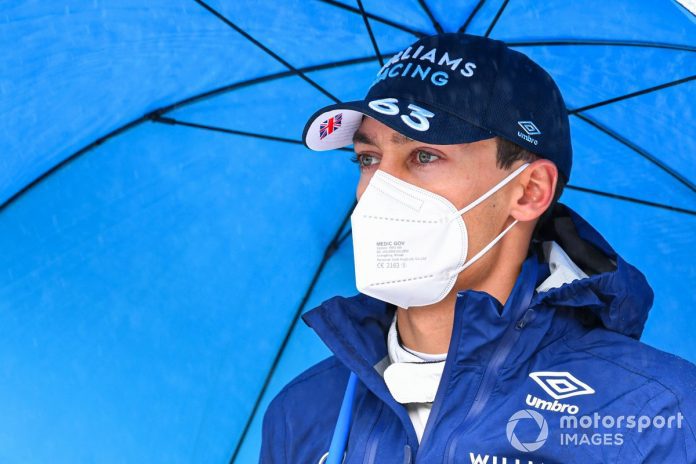 Lewis Hamilton has sent a congratulatory message to George Russell after his historical qualification result.

Russell dropped all jaws when he finished an astonishing qualification race in an equally astonishing P2. He will line up at the front of the grid alongside pole-sitter Max Verstappen, who stole the pole position from him in the dying moments of Q3.

Nevertheless, it is a historic result for the young Williams driver. By pulling it off, he out-qualified some big names in better cars, including Hamilton himself. The seven-time champion was impressed with his efforts and sent a congratulatory message to Russell after his result.

“It’s been a very difficult day for everyone. I just tried to stay positive and stay focused and calm,” Hamilton told express.co.uk.

“Well done to Max, he did a great job right at the end. My first lap was really good but the second I struggled a little bit. Also a great job by George, that’s fantastic.

“If it’s like this tomorrow it’s going to be tricky. There’s this balance of straight-line speed versus that mid-section downforce. We tried to strike the best balance possible,” he concluded.

Top of the world

The elated Russell, meanwhile, was absolutely buzzing. For a driver you would never pick to sniff the top five, he starts the race in second place on Sunday. This is a huge moment, given how Russell picked up points for the first time in his career last race in Hungary. It therefore came as a surprise to no one that he was absolutely thrilled.

“I don’t know what to say to be honest,” Russell beamed.

“I thought we’d be doing a good job to get out of Q1, how we got on yesterday. Now we’re standing here on the front row. The guys did an amazing job today. We were on the track always at the right time.

“The car was feeling great, I had so much confidence. On to tomorrow now. I think I was in a fortunate position that we had nothing to lose.

“We were in Q3 which is not the norm for us. We had to go for it and saved the full maximum engine mode for the last lap and thought ‘Let’s go for it.’

“I’m buzzing, absolutely buzzing. Tomorrow’s the important one. We’ve got to go out there and score some points,” he concluded.

Lewis Hamilton was lacking confidence from the beginning: Nico Rosberg

“Mind his tongue if he wants to stay”: Tsunoda warned after...