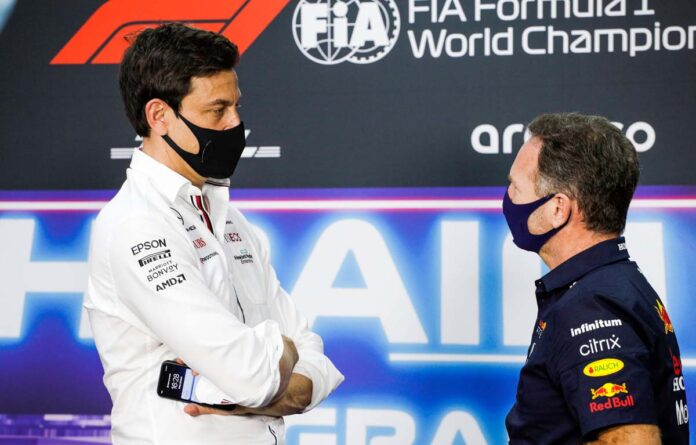 The Mercedes versus Red Bull rivalry has now gone beyond the track. The bosses of the two teams have been going at it hammer and tongs throughout the season. The Red Bull Team Principal has done it again, taking a swipe at Mercedes in the process.

Horner mocked Wolff after the Russian GP, saying that he loves it when Wolff gets annoyed. However, he stressed that despite all the competitiveness, there is still a great deal of respect between the two teams.

“This is the first time it’s a true scrap, it’s a true competition, and there is a respect, I think, between the teams, but I think we operate in very different ways,” Horner said.

“I want to be very much on the front line, I sit on the pit wall with the strategists and the engineers. Toto will sit in the garage next to the press guy, so they’re different functions, they’re different roles.

“They’re different outlooks, but of course, the competition is fierce. I think that’s the key thing about this championship. We’re loving the competition and the more Toto gets wound up, the more fun it becomes.”

The rivalry between Red Bull and Mercedes on track has been as exceptional as it had been outside it. Max Verstappen and Lewis Hamilton are spearheading the title race, with the former trailing the latter by two points after the Russian GP.

The pair have been involved in numerous controversies due to the heated nature of the rivalry. They collided on two occasions – one at Silverstone, and the other one at Monza.

However, the respect between the two drivers remains high, and it hasn’t evolved into something toxic. We are getting exciting racing this season, and that is the best thing we can ask for.

Verstappen reveals his success formula and how he knew talent alone...