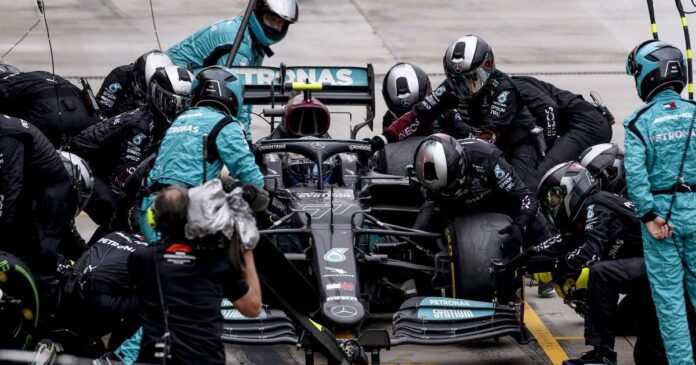 Mark Hughes has labelled Mercedes as the underdogs this season, with four races left between now and the end.

The Mexican GP saw Mercedes concede more ground to their rivals yet again, having been a comfortable second-best throughout the weekend. Red Bull put them to the sword, and were it not for Lewis Hamilton defending for his life against Sergio Perez, it might have been more embarrassing.

Max Verstappen nailed the start of the race with aplomb, and from then on, it was all him. No one got a sniff at him, and he comfortably crossed the line to win the race. With four races to go, Mercedes’ back is against the wall.

Hughes labelled Mercedes as the underdogs this season, and said that time is ticking for them.

“Once Max Verstappen committed to the outside down to Turn 1, drawing level with the Mercedes duo after a nice slipstream from them, he was always going to be standing later on the brakes,” Hughes wrote in his column for the Race.

“And just like that, the disaster of Mexican Grand Prix qualifying was forgotten. Clean into the lead, he checked out. His Formula 1 title rival Lewis Hamilton wouldn’t see him again until the podium ceremony.

“For Mercedes, the emotion was relief. Even after locking out the front row, it was convinced the Red Bull, with its much bigger rear wing, was going to be just too much for it.

“Red Bull had messed up its qualifying and Mercedes had taken a small step forwards and that had been enough to change the natural Mexico order in Q3. Within a few hundred yards Verstappen changed it back again. A distant second place for Hamilton was reckoned by Mercedes the absolute maximum possible.”

Hughes also highlighted why despite their various adjustments, Mercedes were no match for their rivals in Mexico.

“Furthermore, the DRS is not so effective with 25% thinner air,” he continued.

“Mercedes no longer had a second car to use in this strategy game and it was two against one, with Hamilton the meat in a thick-sliced Red Bull sandwich.”

Massa makes bold claim over skill as driver – “Convinced I...