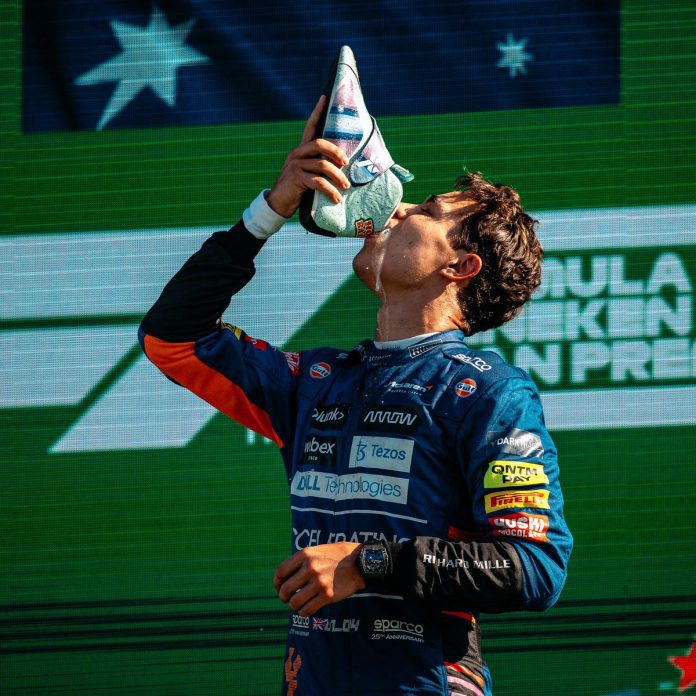 Lando Norris made a cheeky move on Max Verstappen after a successful weekend in Monza. Verstappen’s race was cut short, despite the McLaren driver moving up to second place on the podium. Norris is on a mission to convert Max’s supporters, having already claimed the Orange Army.

On her Verstappen merchandise, a fan received a wonderful surprise. The autograph of the British driver was on a miniature of his helmet. It had the words “Max Sucks” on it which was added by Lando Norris.

This was a classic Norris move, as he was the second-most amusing driver on the grid, behind his teammate. Fans quickly understood that Norris was influenced by his teammate, with the Max blame being a recurring theme. Ricciardo pulled the same stunt after Max and Daniel collided in Baku in 2018.

Taking a cue from Daniel 😂 pic.twitter.com/0FxQLPEnJb

Norris’ assumption that he and his teammate have little in common could be incorrect. They share the role of the prankster, in addition to the successes on the track.

Lando Norris’ P2 came after a long battle. After losing place behind Hamilton on the first lap, Norris quickly passed and held off the Mercedes. In addition, the Hamilton-Verstappen accident dropped him to P2. Norris came dangerously close to challenging his teammate, but he refrained.

Norris thought of the challenge, according to Formula1 reports.

“I got a bit closer on one lap, and I don’t know why, but I had a few flashes of seeing the incident between Max and Lewis because I saw it quite well in my mirrors. So, when I thought, maybe I’ll try, that kind of was flashing up in my head, and I thought, maybe this isn’t the wisest decision.”

Norris, nonetheless, was a model of sportsmanship and togetherness.

“I would have loved to go for the win, but our first and second, I think I’m just as happy with. The feeling I get for the team is priority over my own feeling in a way.”

The Brit is sure of his place in the team and is confident of bringing in victory one day. “I feel like I still have an opportunity in the future to try and go for it. But in this moment and instance, I was happy just staying where I was.”

With the relationship between McLaren and Norris as strong as it has ever been, Norris will undoubtedly have the opportunity to achieve great things for the outfit.