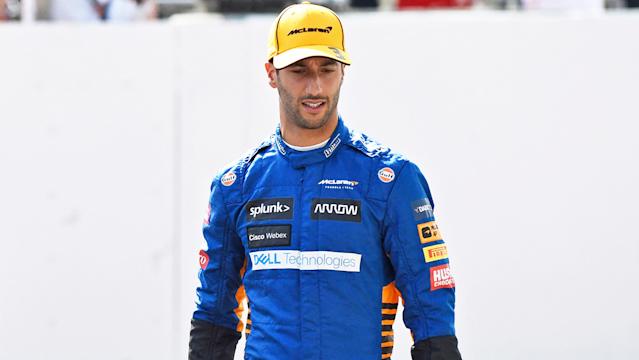 Daniel Ricciardo has explained his embarrassing Q1 exit during qualifying, saying it was practically impossible to avoid.

In a qualifying session filled with shocks, the first one came when Ricciardo crashed out in Q1 itself, in 16th place. The Australian was among the first to set his time, and that meant others naturally bettered his result.

McLaren’s timing of his release, coupled with the track’s ever-drying conditions, meant he was one of the worst qualifiers. Then, Carlos Sainz set a time that relegated him to P16 and knocked him out early.

Ricciardo explained his embarrassing Q1 exit during qualifying, saying he was out of sync with the whole session.

“I think everybody was still improving and yes, if you had a magic wand, you’d probably want to be the last one to cross the line and there’s going to be probably some free time there, so we couldn’t plan any of that,” he told the official F1 website.

“It was yellow flags often into Turn 1, (so) that your lap would get aborted, and then you’re out of sync, so just the nature in these kind of changing conditions, but we didn’t get on top of it today. No big, sad story here.

Despite the setback, Ricciardo vowed to do better on Sunday, and said he will try his best to impress the fans in attendance with his performance.

“We have every option available now, so I guess that will (create) some excitement talking about that and trying to plan a comeback tomorrow.

“I don’t know if it’s going to be easy to overtake or not. I mean no track’s easy, but I think it’s possible. I’ll try to put on an attack tomorrow, put on a charge.

“There’s a few companions with me towards the back and hopefully we can put on a show and charge through,” he concluded.

Read more: Ricciardo discusses the ‘knife in my back’ incident that helped him win Monza GP

Charles Leclerc reckons it is ‘all good’ with Ferrari F1 boss...