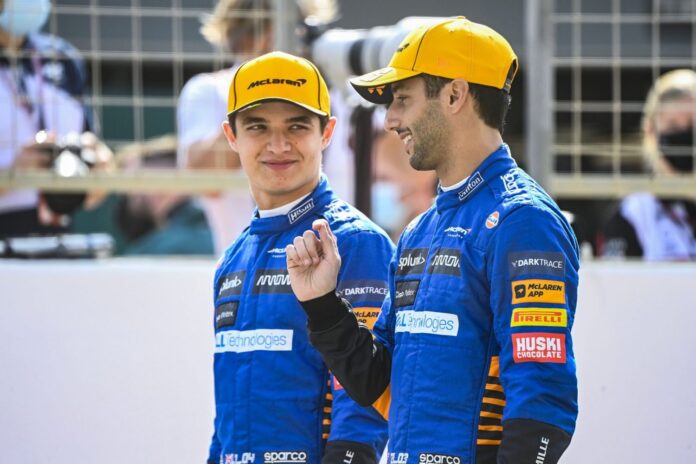 Daniel Ricciardo has said that the McLaren strategy at Zandvoort was “not executed very well.”

Ricciardo had done better than teammate Lando Norris on Saturday.

However, the tough nature of the track meant overtaking opportunities were at a premium. It then got to a situation where Norris had greater pace towards the business end of the season. As such, McLaren adopted a team strategy and let Norris move past Ricciardo. However, Norris was only able to take a single point.

Ricciardo admitted that it wasn’t the best race for the team, and said that the McLaren strategy was not executed very well.

“I don’t ultimately think we had massive pace, so I think that was the reality,” Ricciardo told the official Formula 1 website.

“I think, at best, maybe we were getting one point today. But we tried a little bit of a, let’s say, teamwork strategy to help out Lando, but I don’t think we executed it very well.

“Obviously it’s something we talked about and the team have good oversight on (the) pit wall, so if they see an opportunity to maximise points for the team you have to go for it and trust their view. So we’ll see tonight. My feeling was it wasn’t executed perfectly, but in saying that, I don’t know. I don’t think we could have done much better.

“Maybe it would have been me 10th instead of Lando, but it’s not like we were top seven or something today. So ultimately, we didn’t have great pace – bit of a shame. Obviously you want to be in the fight, and when you do a lot of laps and get no reward, it’s not that exciting.”

Ferrari took full advantage of McLaren’s failure and leapfrogged ahead of them in the Constructors’ Championship. As a result, Ricciardo is eager to bounce back at the third race of the triple-header.

“We’ve got a week until Monza, one of the best races of the year for sure, for actual racing as well as for overtaking,” Ricciardo said.

“So (I am) looking forward to that. I think today as well, as long as we learn from it that’s all we can do, try to grow and make some better moves next Sunday and try to get top five,” he concluded.

“It was hard maintaining friendship with Vettel”: Grosjean opens up on...

Leclerc and Sainz frustrated with Ferrari for qualification failures