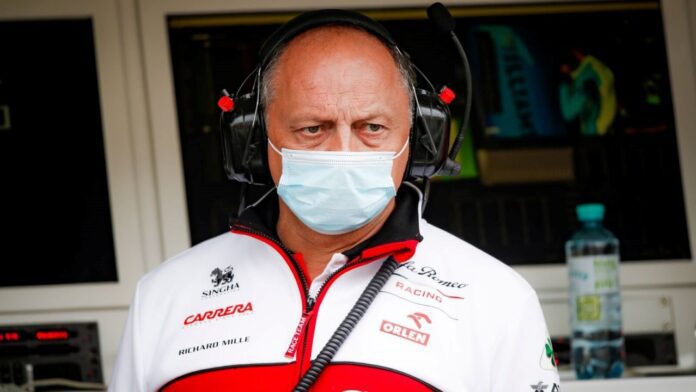 Frederic Vasseur has slammed the FIA for not giving Lando Norris a penalty at the Russian GP.

Norris inadvertently crossed the white line in the pit lane as he skidded across the track on his slicks. He was promptly summoned to the stewards to discuss the issue and a potential penalty.

However, the stewards let him go without one, meaning he kept his seventh-place finish.

This ruined Alfa Romeo’s initial celebrations for Kimi Raikkonen, who they thought would take Norris’ place after finishing P8. That hope was soon dashed, and the Team Principal was not happy with it.

Vasseur slammed the FIA for not giving Norris a penalty, saying that they shouldn’t let drivers off the hook because they are nice.

“Everyone thinks Lando is a nice guy and nobody says anything bad about him in the paddock, but we can’t change the rules because he is nice and actually deserved the win,” Vasseur said, as quoted by Motorsport-total.com.

“If you cross that line then you should get a penalty. That’s how it’s been several times.There was also no safety issue or time gain for Yuki Tsunoda when he got his penalty, but he also just got a penalty. Nobody complained about that, because the rules on this are clear.

“Lando had a very big advantage. In this scenario he would have had to drive another lap on slicks, so a five-second penalty would not even have been enough as a penalty.”

Vasseur expressed his annoyance with the FIA regarding their inconsistency with handing out penalties. He argued that such incidents are dissatisfying for teams.

“I’m not a fan of that,” Vasseur said

“On Sunday, the race results should be clear. That is better for everyone. Then at least I can still go home”, he concluded laughing.

“I maybe need to shut up next time”: Wolff takes the...